Heading up toward Tworoose Pass (no idea what the name means) provides magnificent views of Big Ridge (yep, that meaning is pretty obvious) and Lake Fork drainage. 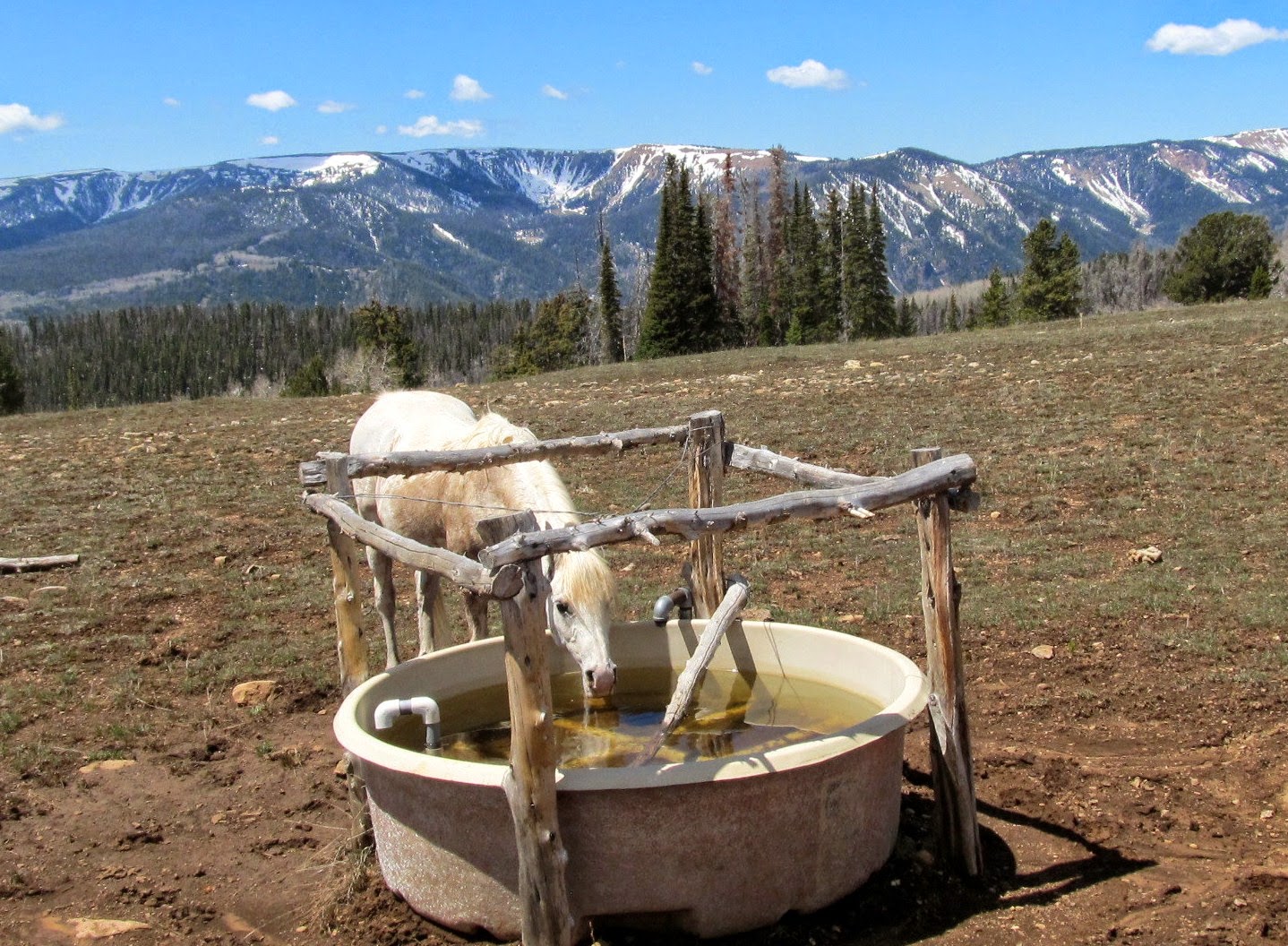 A spring-fed trough provided a nice drink for Mischief.  He's not getting ridden much this year, but he gets his exercise by following Coco and Boss. 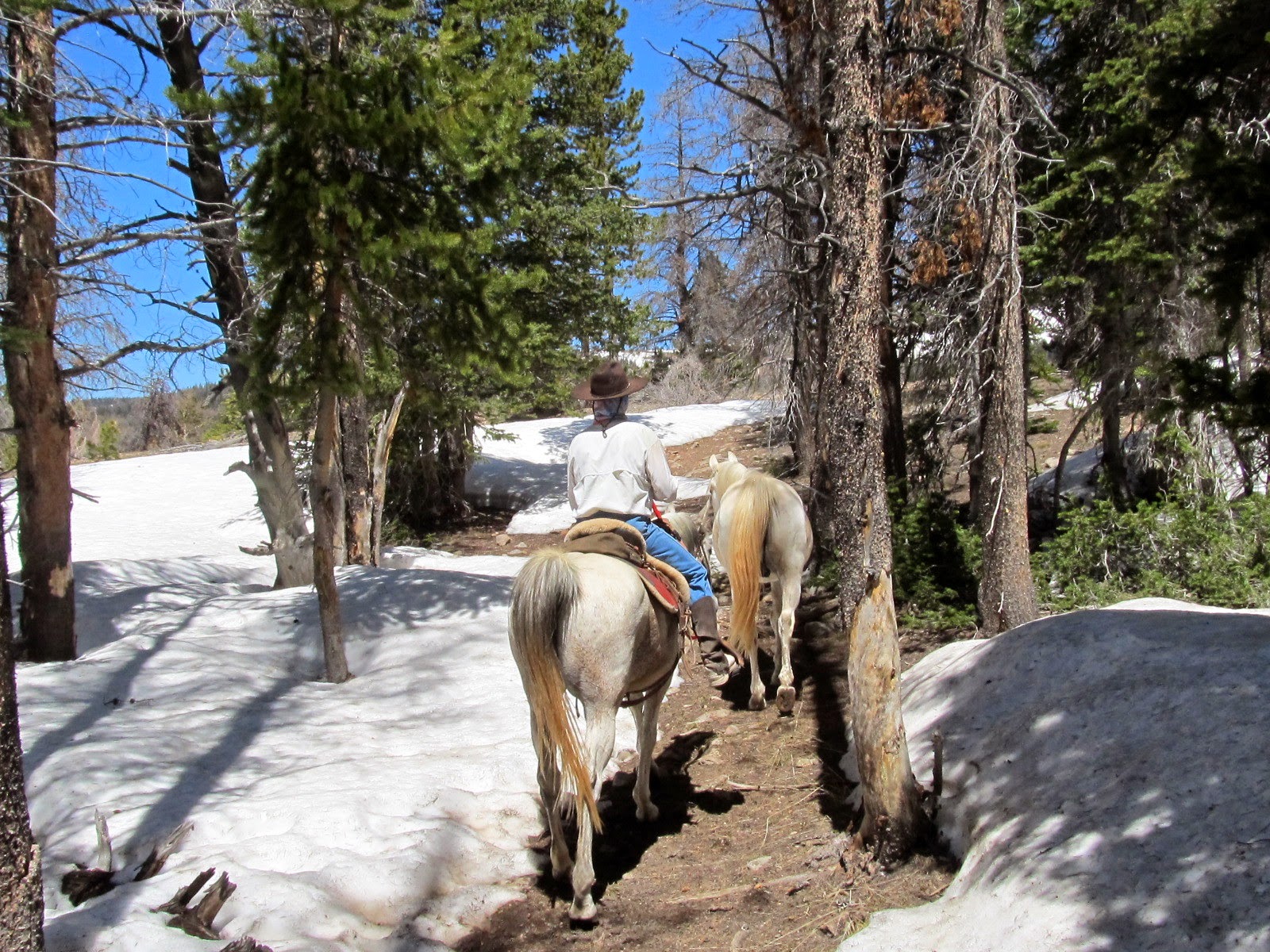 We came to quite a bit of snow in a Ponderosa Pine forest just over 10,000 ft.  Fortunately, critter traffic created a snow-free lane that worked perfectly for us.  We saw quite a few deer and elk on the way up, so plenty of wildlife is going through these woods. 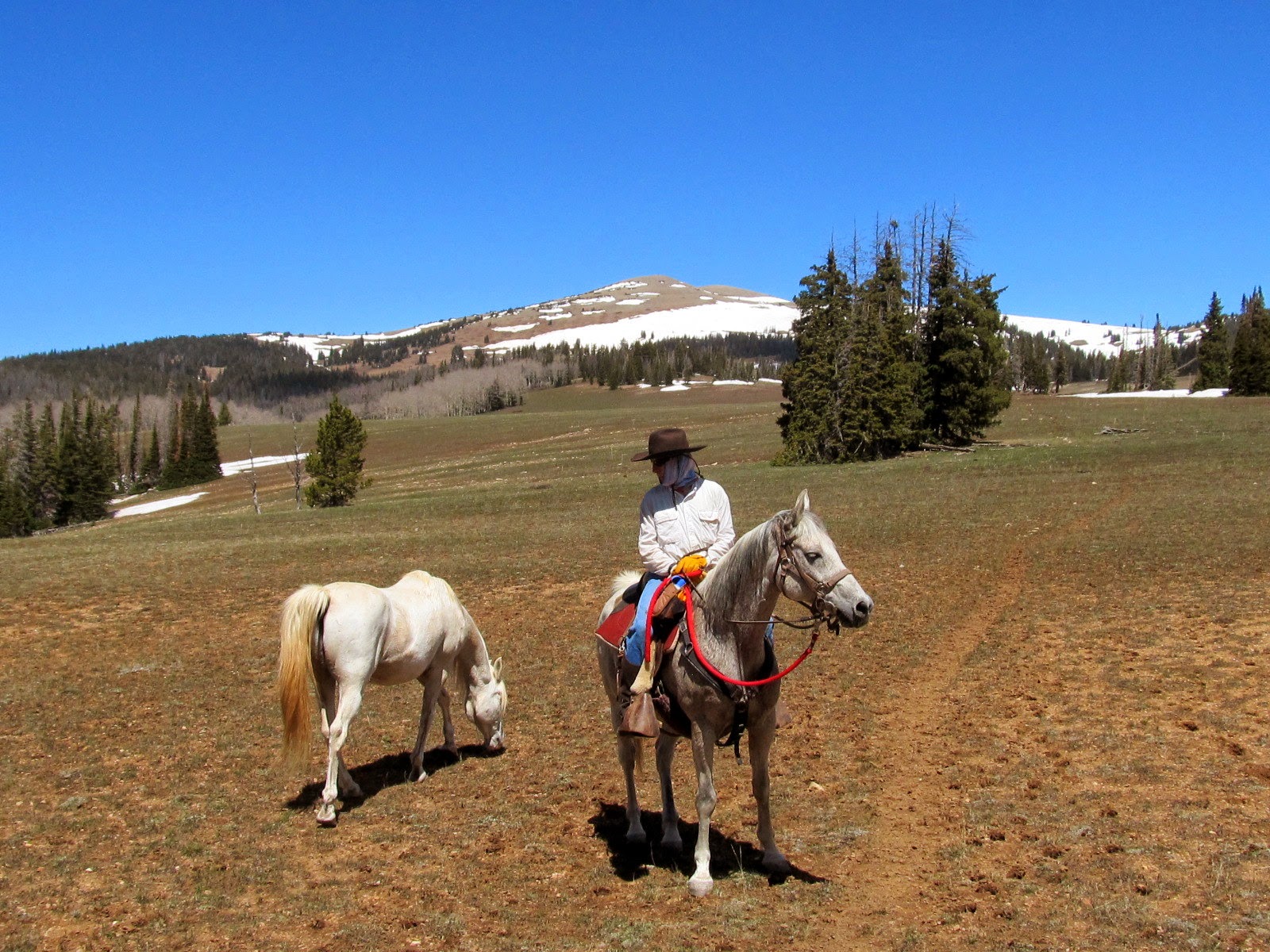 At the edge of the big meadow, we had a nice view of Duck Mountain (another strange name, related to the Duck Lake located in the valley below). 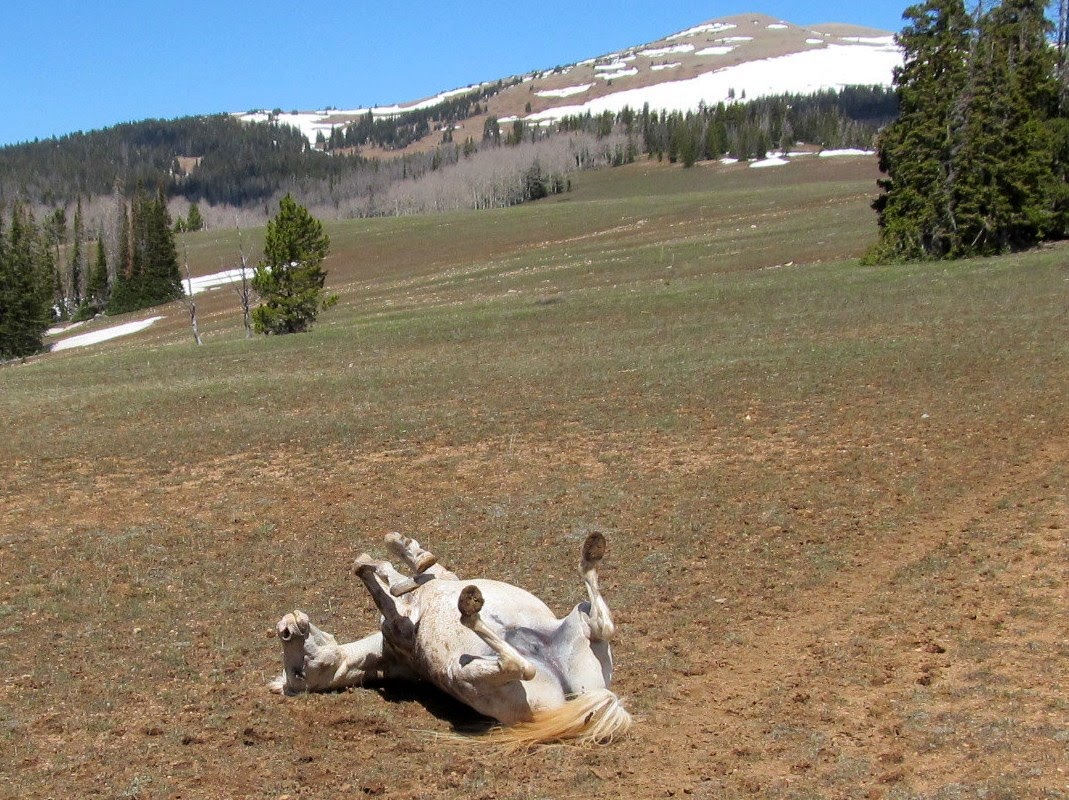 Mischief made his buddies jealous when he enjoyed the freedom of a roll. 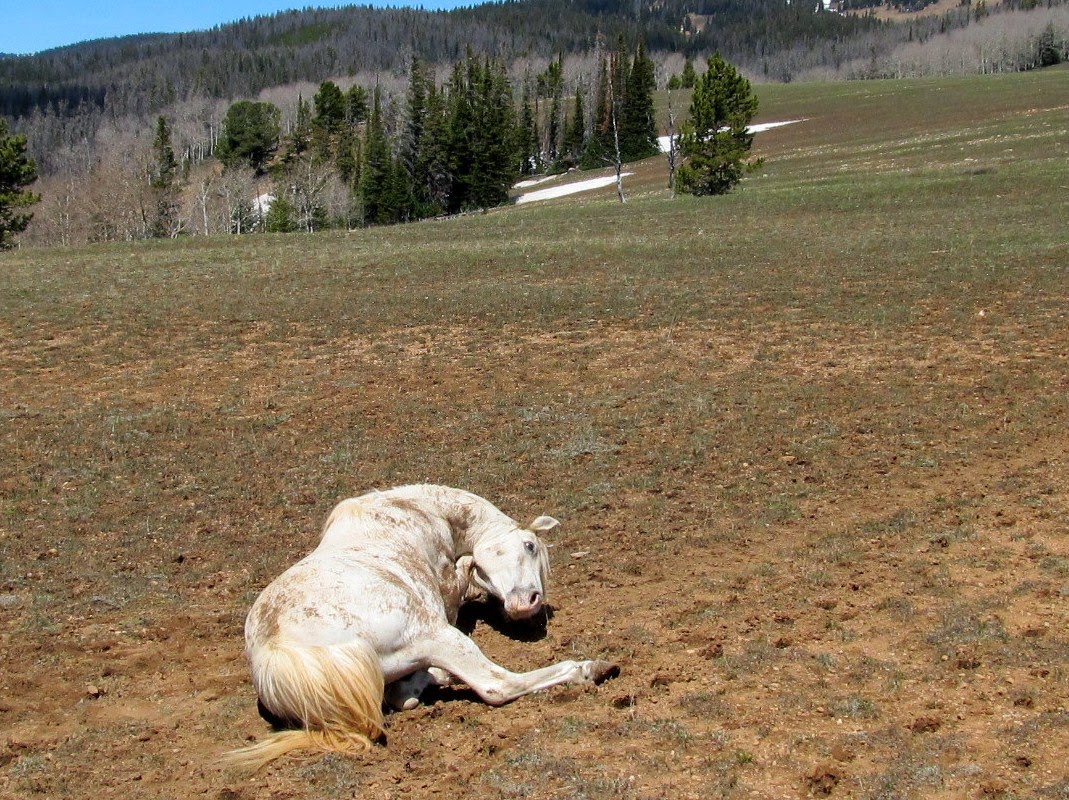 Before he got up, he used his back hoof to scratch his itchy jaw. 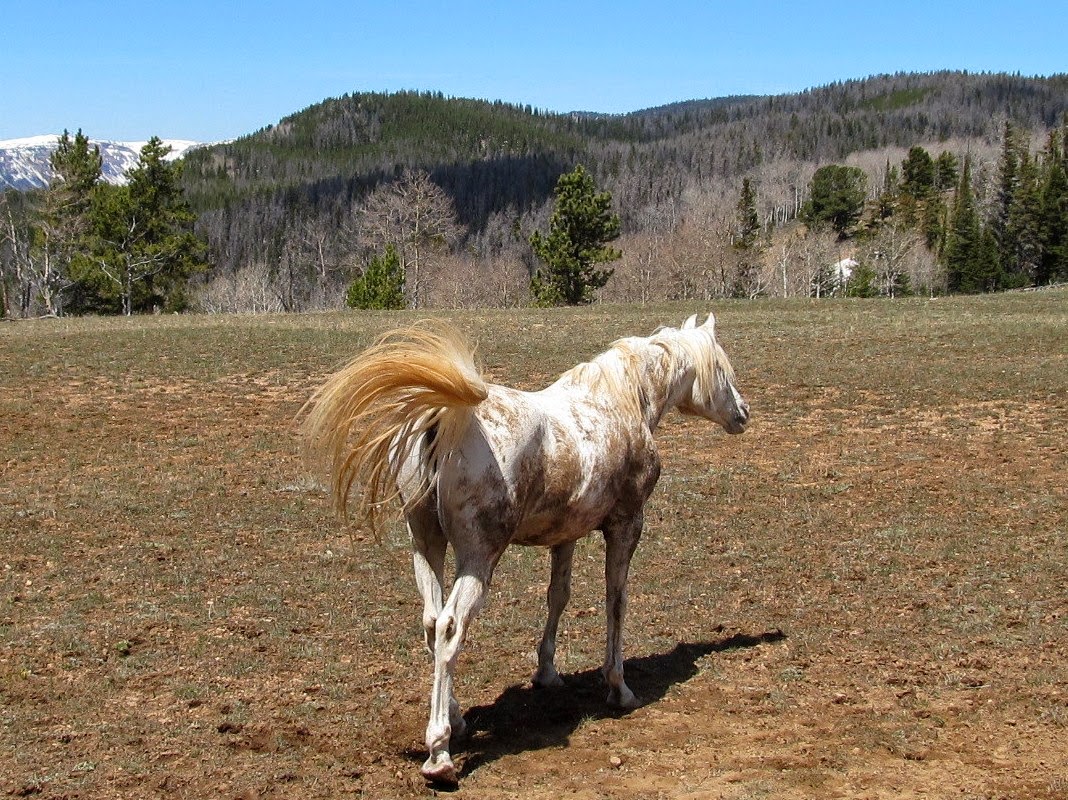 He's looking a little dirty here.  But that roll sure did feel good. 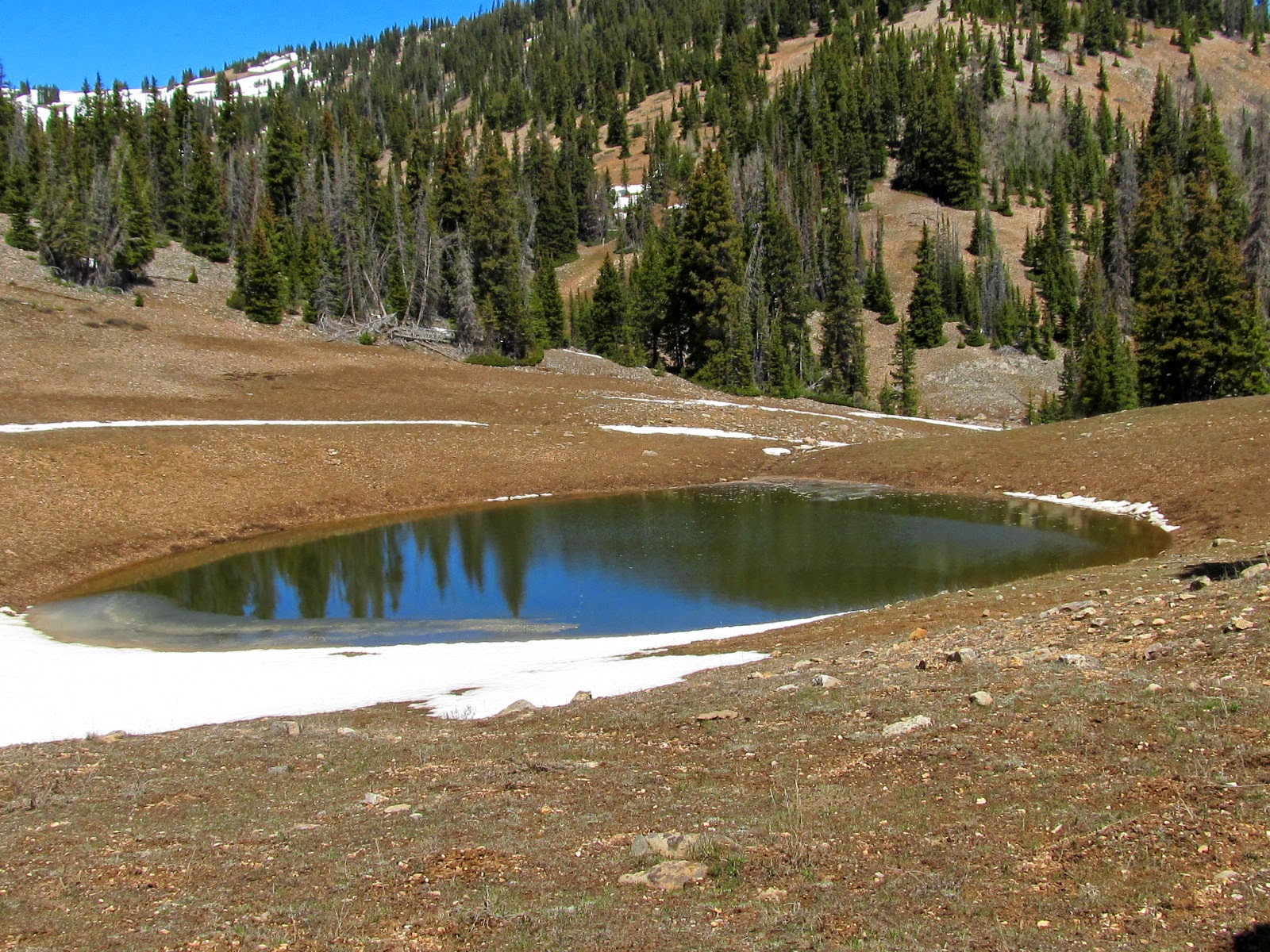 By the time we reached Baum Lake, the trail was getting muddy.  One side of the lake was rimmed with frost and snow. 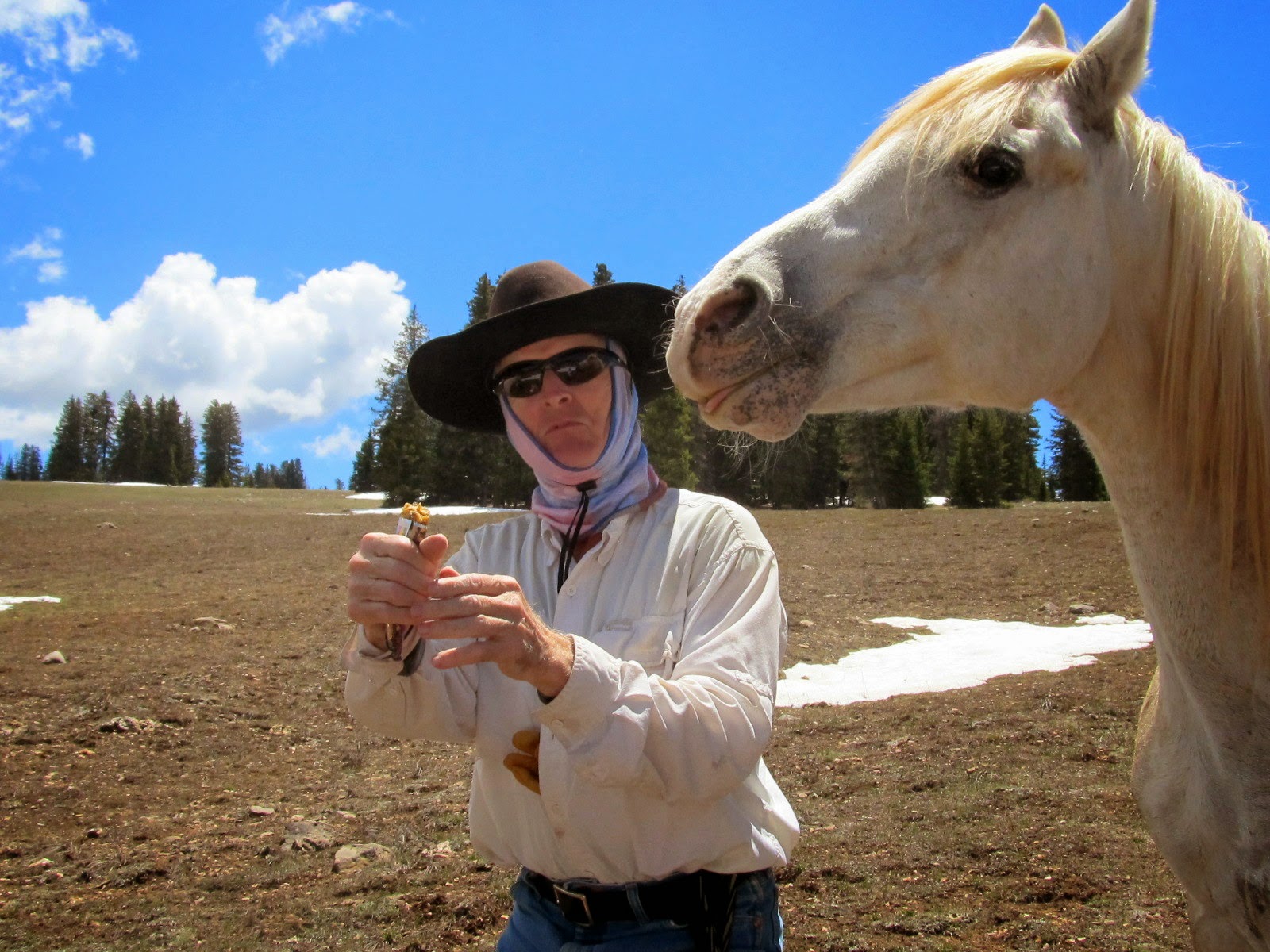 When we took a granola bar break.  Mischief wanted to share. 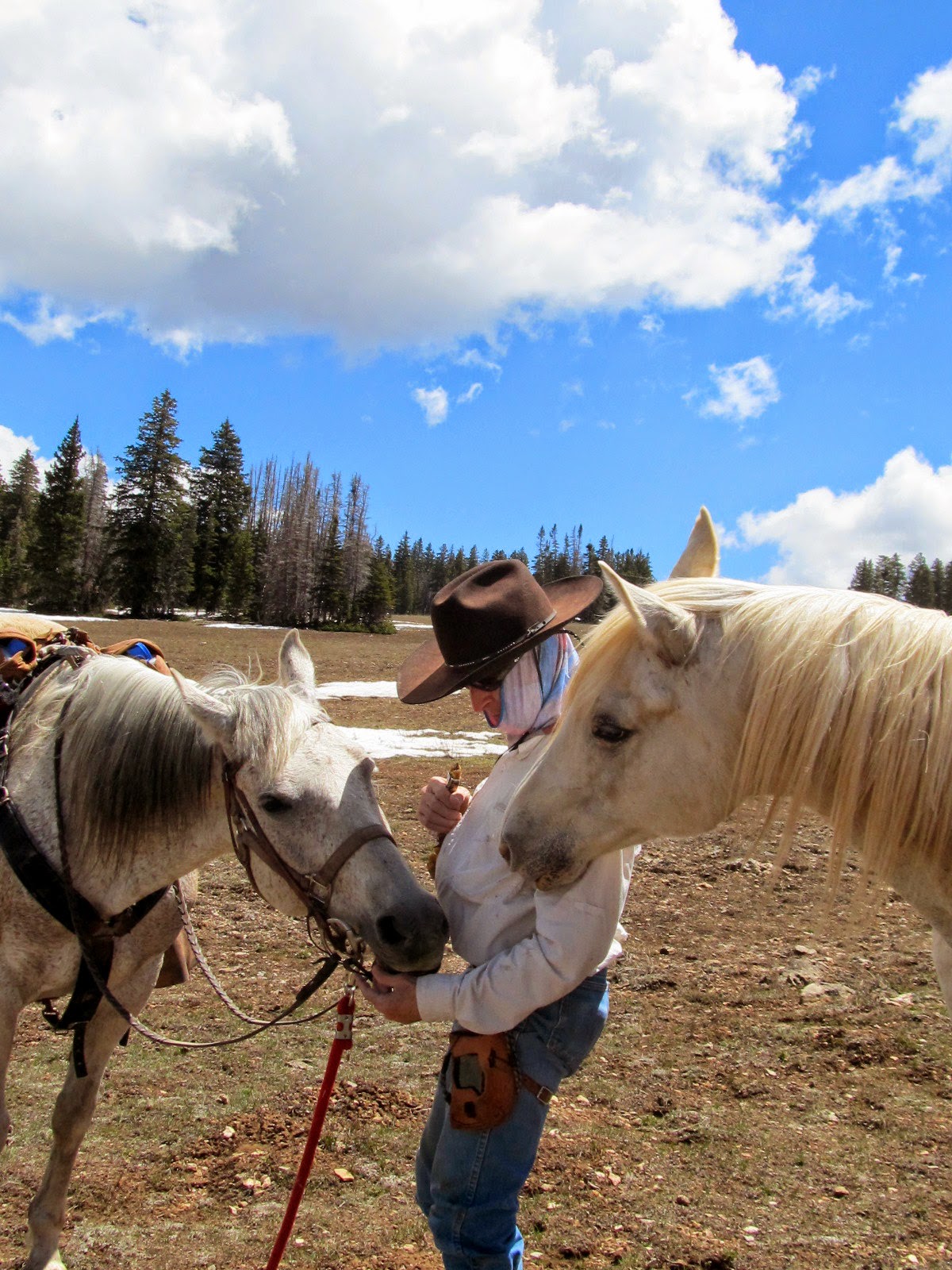 Then Coco wanted some, too. 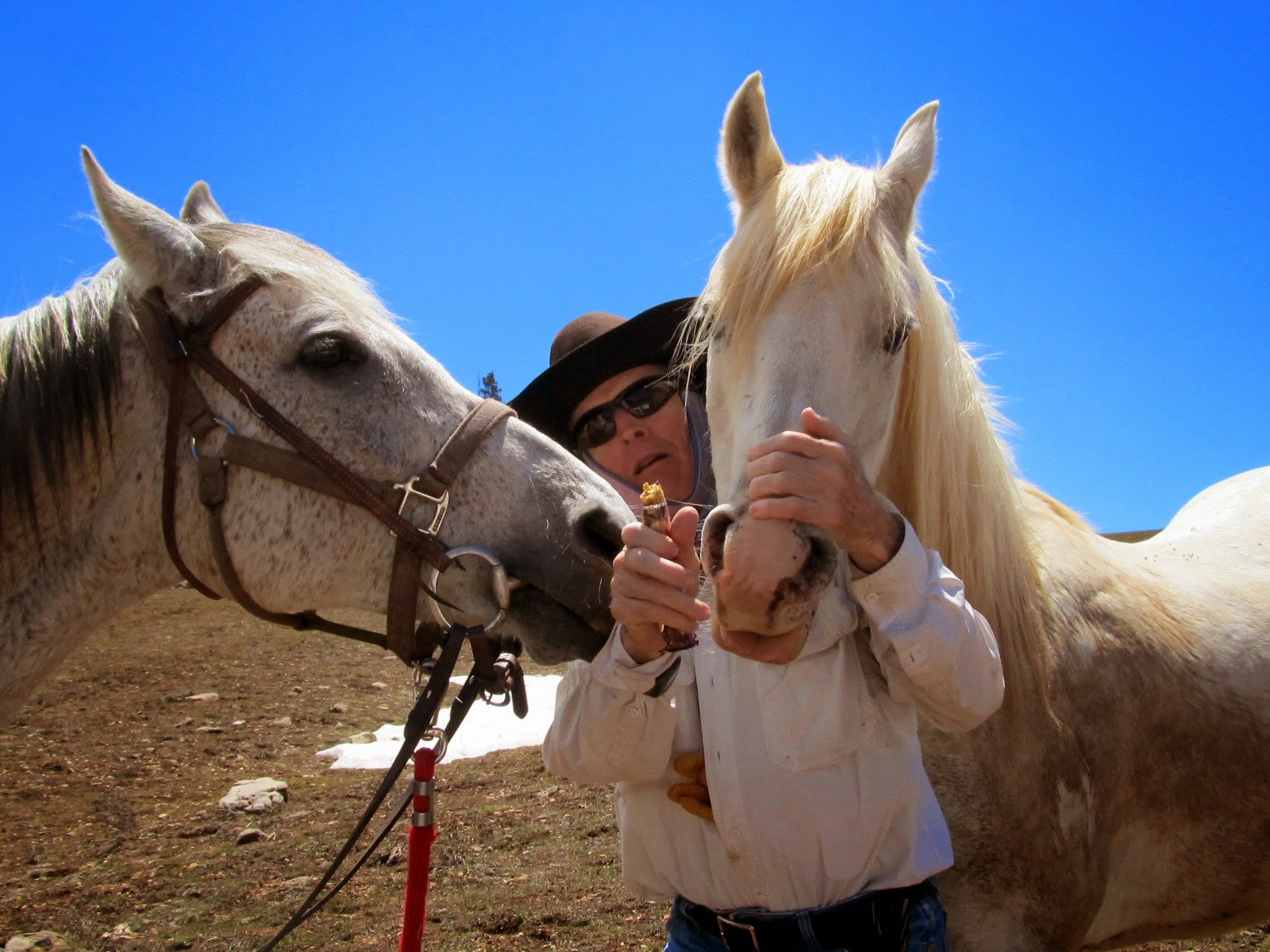 Mischief is moving his lips hoping to get one more taste.
Daisy would have wanted a bite, but she had to stay home.  We thought the ride would be too long and hot for her, with not enough water holes.
Posted by Janie at Wednesday, May 28, 2014 15 comments:

How High Can We Go?

This time of year, choosing a ride is a guessing game involving snow levels at any given altitude. 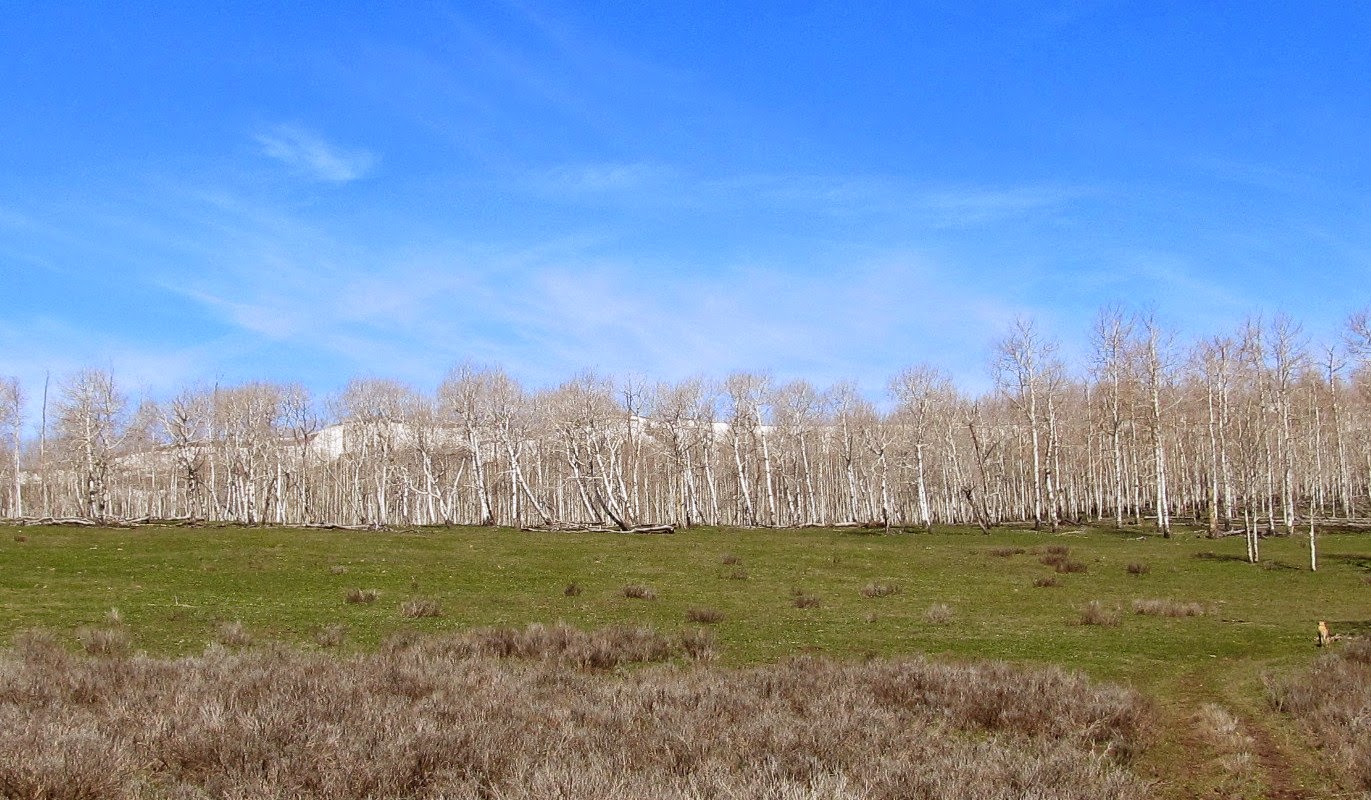 On Saturday, we tried a ride begining at Currrent Creeek Reservoir and heading up toward Coyote Ridge. This meadow at about 8500 feet is mostly dry, with spring grass coming up nicely. The aspen are leafed out a little lower, but they haven't yet turned green here.
Spring beauty and a sprinkling of yellow buttercups dot the meadow. Bluebells bloom in marshy areas. 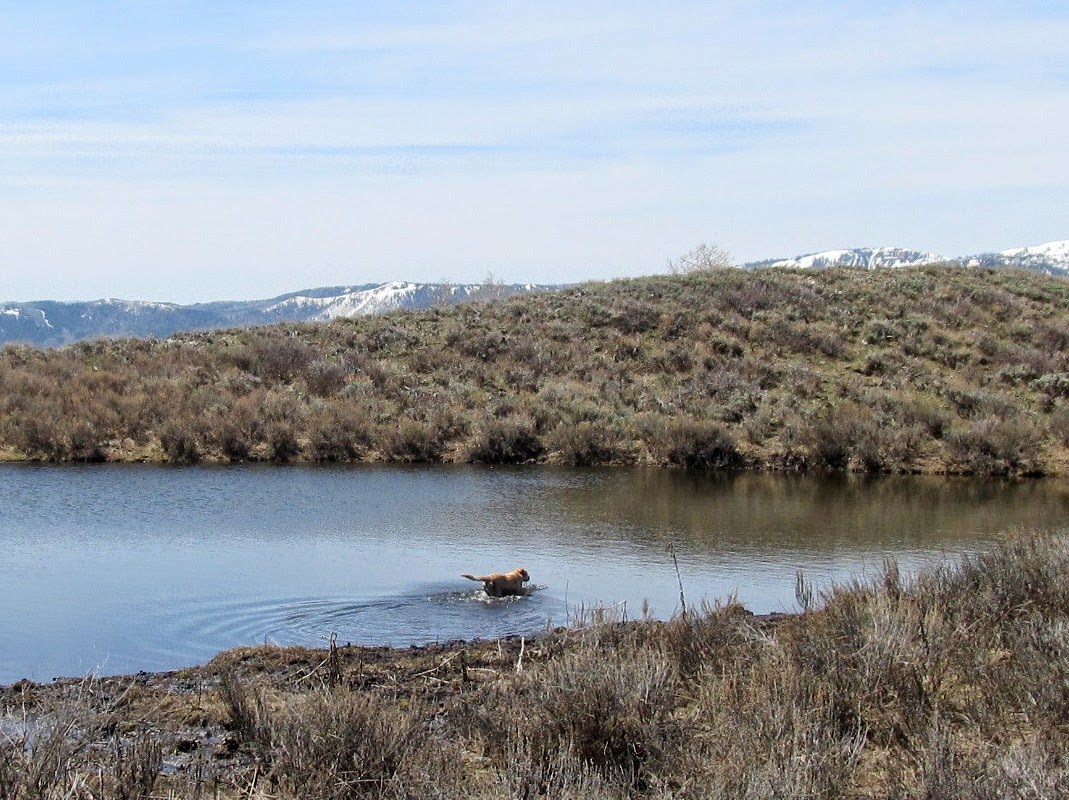 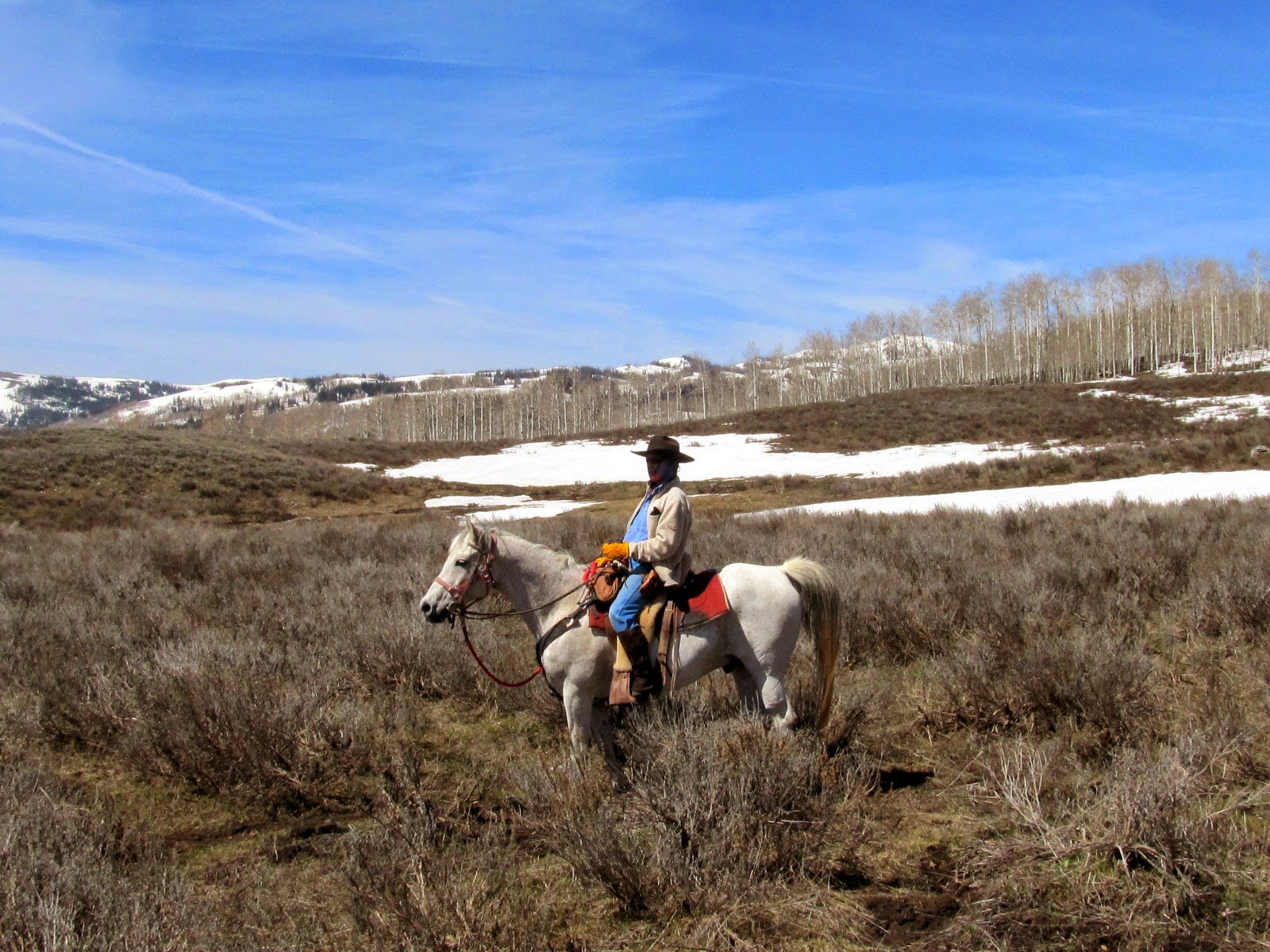 A little higher, about 9200 feet, the snow is too deep for easy passage. 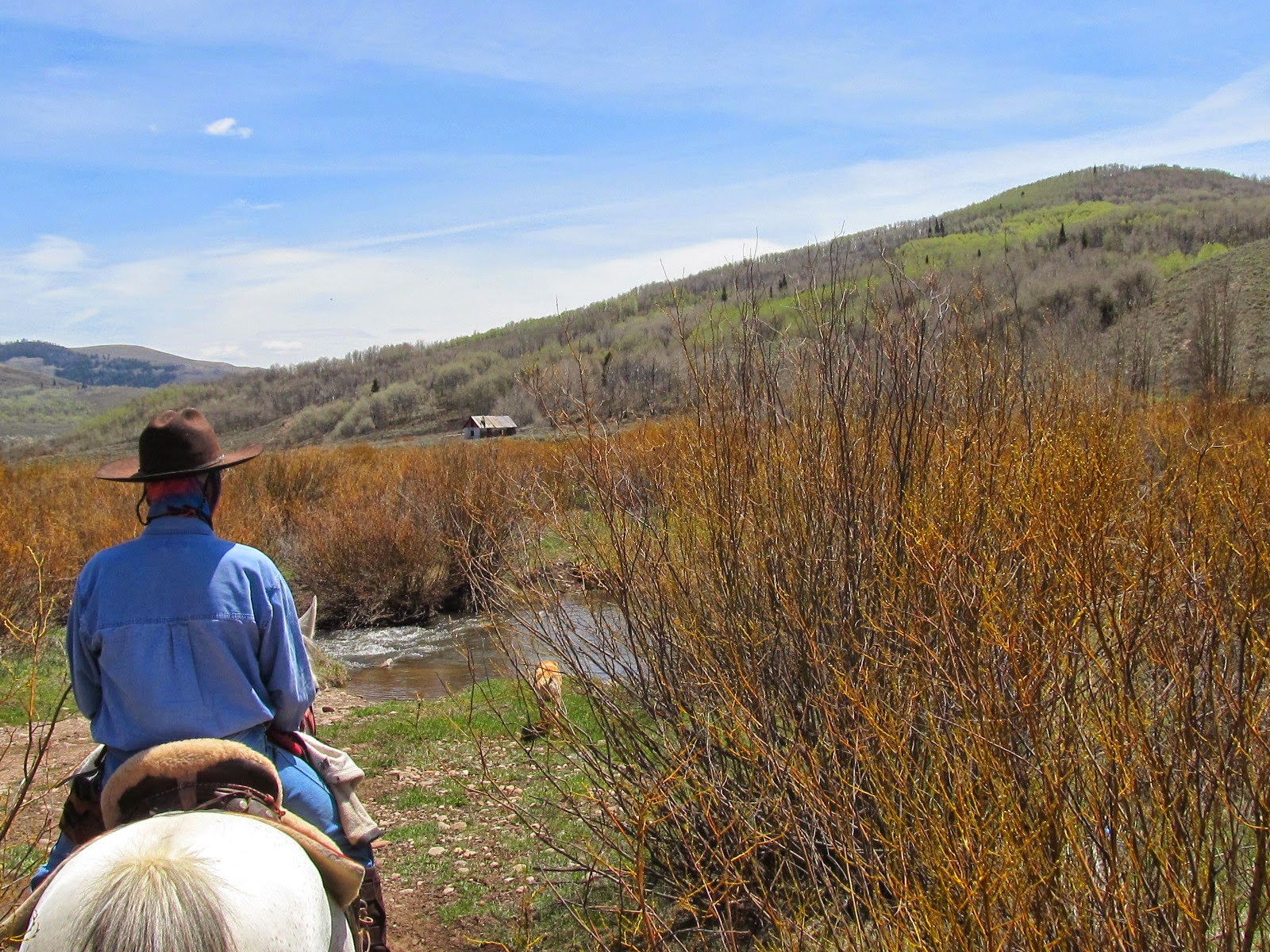 With a ride to the ridge ruled out, we went back to the reservoir and rode along roads until we saw this old homestead. 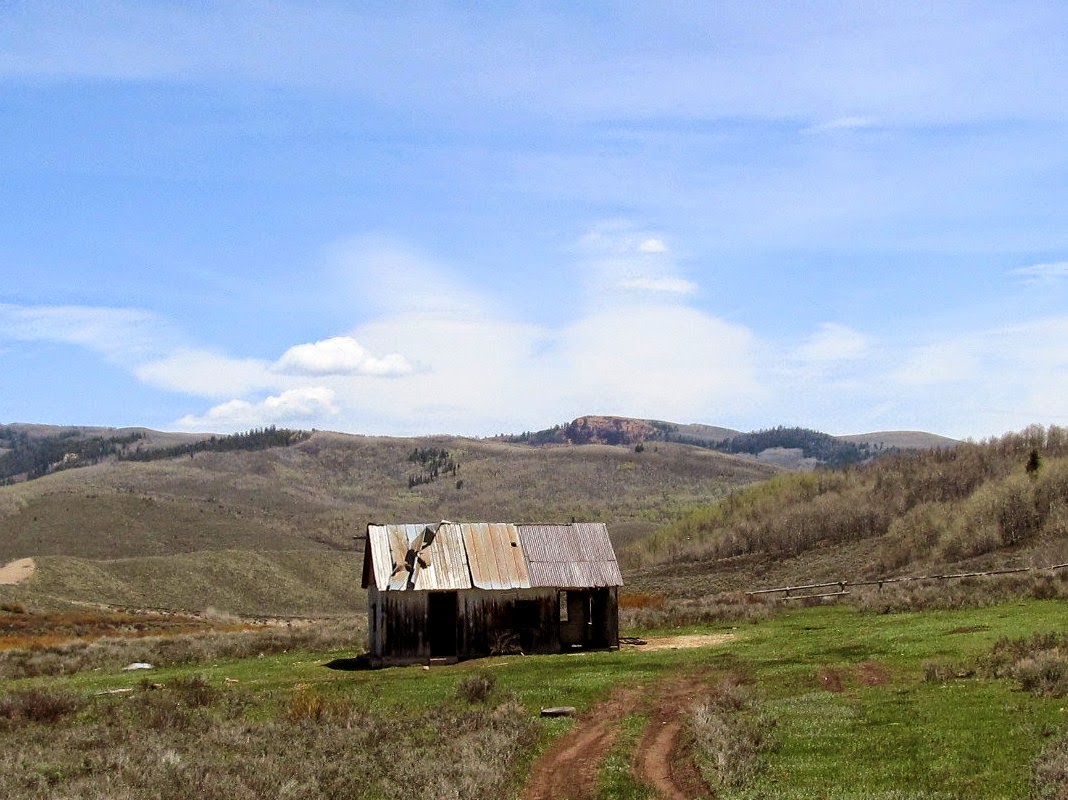 We didn't get too close, since the loose tin panels from the roof were blowing in the wind and loose nails were likely.  Anyone would be lucky to live in such a beautiful spot.  The house is a fixer-upper, though -- plenty of loving care needed! 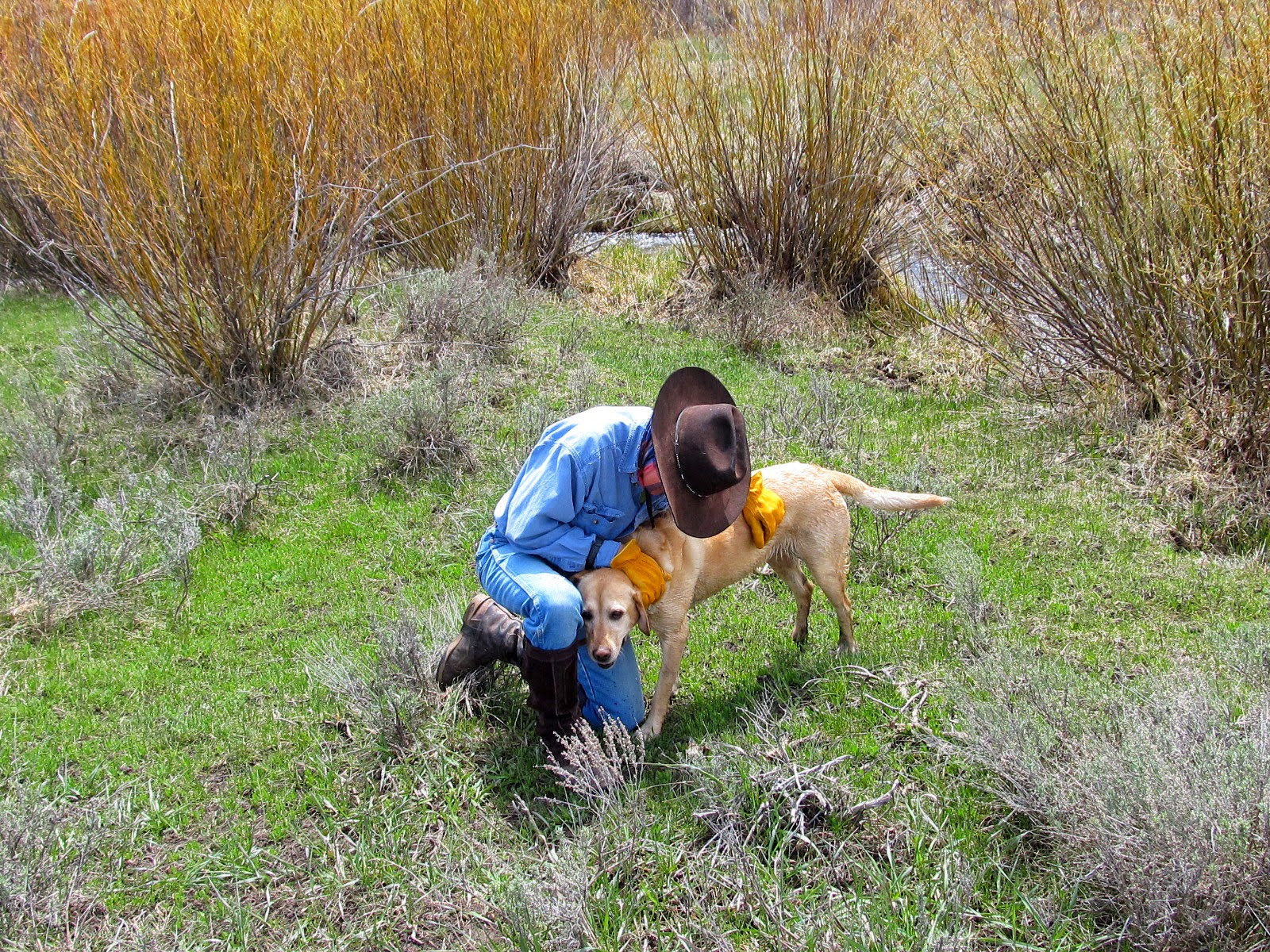 No matter how long the ride, Daisy is always ready for a little quality time with her alpha. 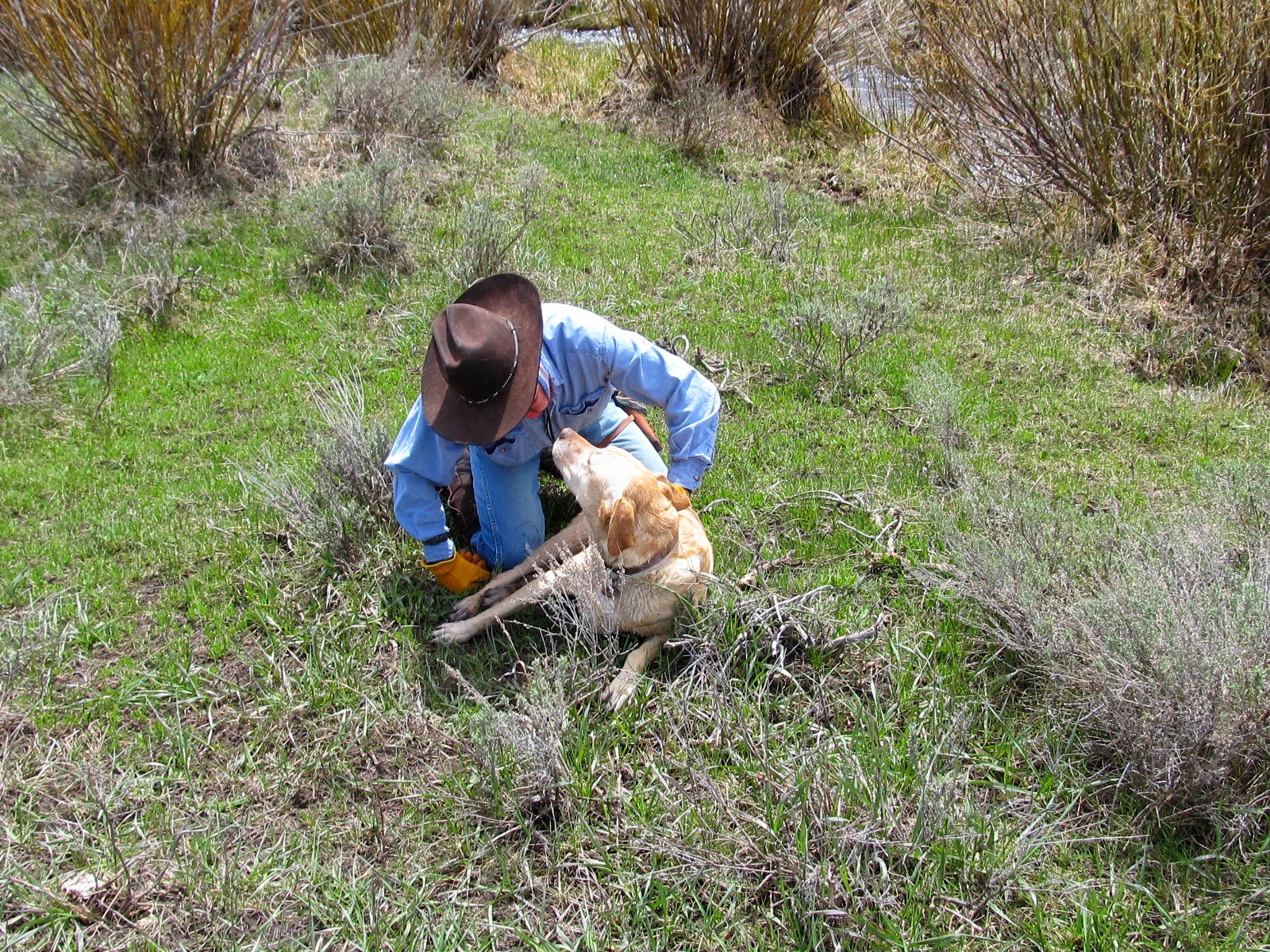 In case you're wondering what Steve is "packing" in the holster on his left hip... it's a GPS!  He wanted to assure our readers that he does not feel the need to pack heat on our Utah trails, especially not with Miss Daisy on the job to protect us.
Posted by Janie at Tuesday, May 20, 2014 14 comments:

The Mount Carmel XP ride takes place in southern Utah, just to the east of Zion National Park.
We arrived at the ride camp last Friday evening, planning to ride on Day 4 of the 5 day event.  We were entered for a 50 - our first 50 mile event.
Janie rode Boss, since he has a heavy quarter horse build, not ideal for endurance.  Steve rode Coco.  With Boss carrying a lighter load, the two horses' heart rates (according to pulse monitors) stay almost identical throughout a long, hard ride.
At 7AM when a group of about 50 horses and riders pranced out to the starting point, both of our horses were charged up and ready to go. Steve was in major competitive mode, too.
For the first few miles, the trail was narrow and everyone traveled in a line, moving at a fast trot.  The horses didn't start to spread out until the trail widened.
Since the day's high was predicted to be about 85 F, we planned to keep up a fast trot wherever possible for the first few hours, taking advantage of the cool morning.  For most of the first half, we stayed with riders who usually finish in the top ten.  Just before the lunch break, we stopped for a water break and when we started again, no one else was in sight. We missed a turn and found ourselves a couple of miles down the wrong road. After 30 minutes or so of wandering, we finally found the lunch camp.
We were about to give it up at that point.  The ride manager had not been able to download the route to our old model GPS, and the map provided was condensed and a bit difficult to follow. We doubted we could find our way by just following the flags.
Luckily for us, a very kind, considerate and experienced rider named Angie had the GPS route on her unit. She insisted that we WOULD finish the ride, because she was going to stay with us until we did. She was pure guardian angel. We managed to keep up with her and her 5 year old Arab  pretty well.
And yes, we did complete the ride! Both horses "pulsed down", meaning their pulses dropped below 60 beats/min, in 5 minutes or less.  So they weren't too stressed.
The horses were tired that evening, but perfectly sound, eating and drinking normally.  Our human muscles were a little sore, but not much more than after the 25 mile rides we have done before.  We felt good when we realized we had come in mid-pack, about 25th  out of more than 50 riders.   We felt especially good since this ride attracts many Tevis riders.  The terrain near Zion is similar to the part of California where the Tevis Cup occurs.  The Tevis is a 100 mile ride that is considered one of the toughest in the endurance world.  At Mt. Carmel, we rode with people not only from Utah, but from California, Arizona, and Colorado, too.  Some riders traveled as much as 3 days to get there.   A T-shirt logo we saw at the ride seems like a good motto for this active group: "You can rest when you're dead!"


Our ride last weekend coincided with our 40th anniversary. We’re lucky to be in good enough health to stick on our horses for 50 miles. Plus, we mostly still like each other when the rides are done.
Posted by Janie at Tuesday, May 06, 2014 23 comments: