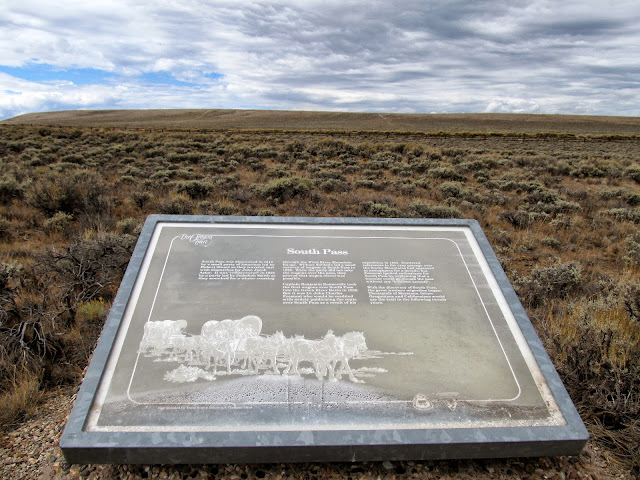 On our way back from Yellowstone National Park, we noticed a point on the map labeled "the summit of the original South Pass." 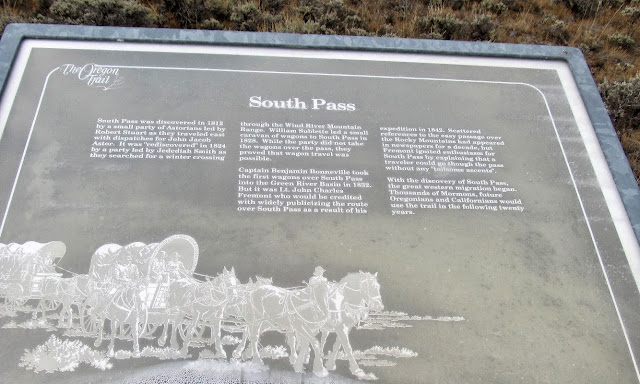 Intrigued, we took an unmarked gravel road, which turned into a rarely used 2-track, to the site, marked with the faded sign shown above. 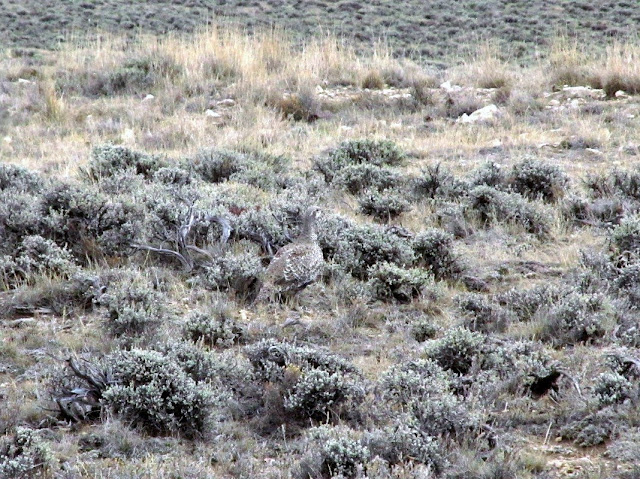 While traveling down the road, we saw several sage grouse, which blended into the environment very well, but didn't seem at all wary.  The pioneers called them "prairie chickens".  These birds, about the size of a small domestic chicken, could easily have been hunted by the children of the group as the wagon trains passed through.  A grouse a day per family would have added considerably to the meager trail fare. 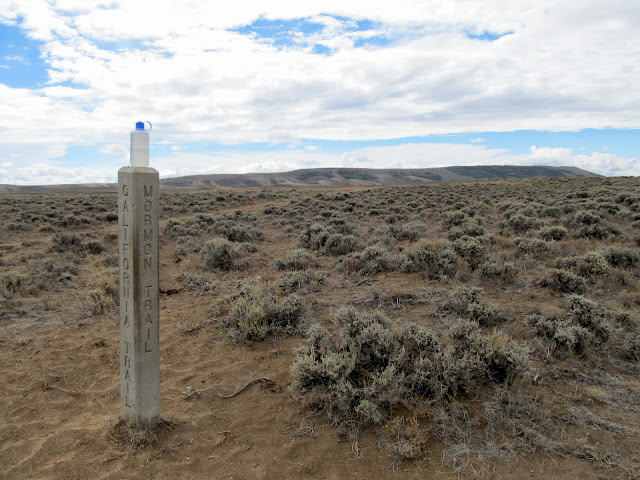 This 3 way marker was labeled Mormon, California, and Oregon Trails on 3 sides, marking the path that all 3 groups traveled.  The state of Wyoming has reconstructed a mining town at what is named South Pass City, about 20 miles due north, which attracts tourists.  Sadly, and surprisingly, this actual South Pass summit, the trail taken by about 400,000 souls traveling west in the mid-1800's, has very few visitors in modern times. 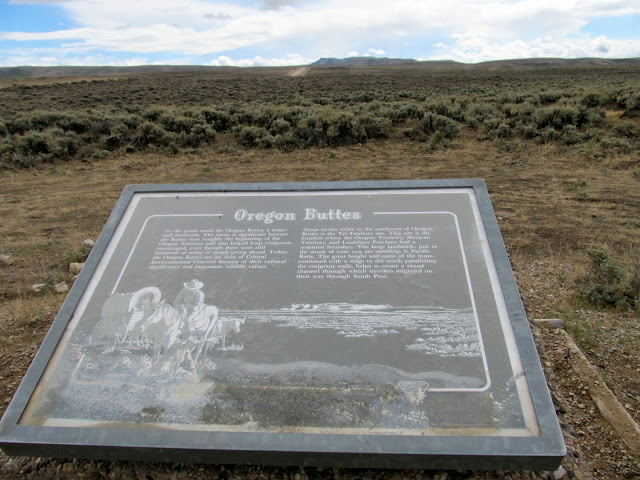 Another faded marker shows the Oregon Buttes.  This landmark can be seen directly above the sign and is visible for many miles, a compass for weary travelers. 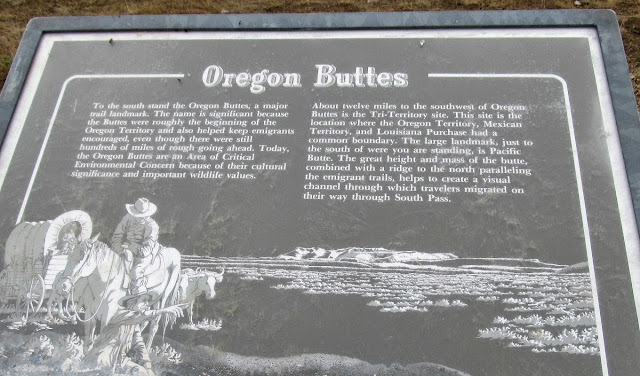 Back on the paved road, we found a few more tributes to those who traveled west. 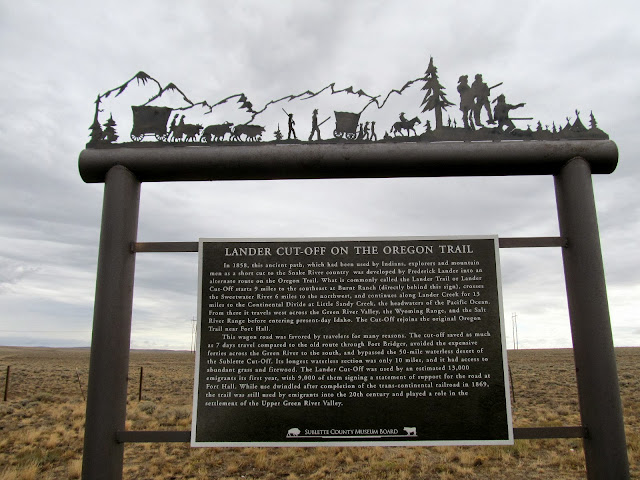 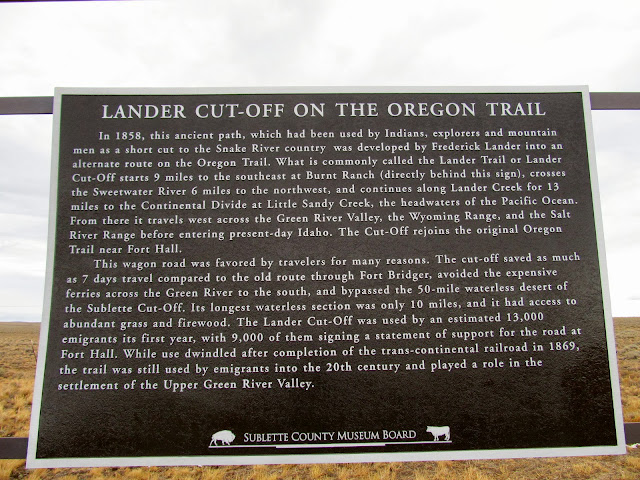 Lander Cutoff was used by some to shorten the trip to Oregon by up to a week. 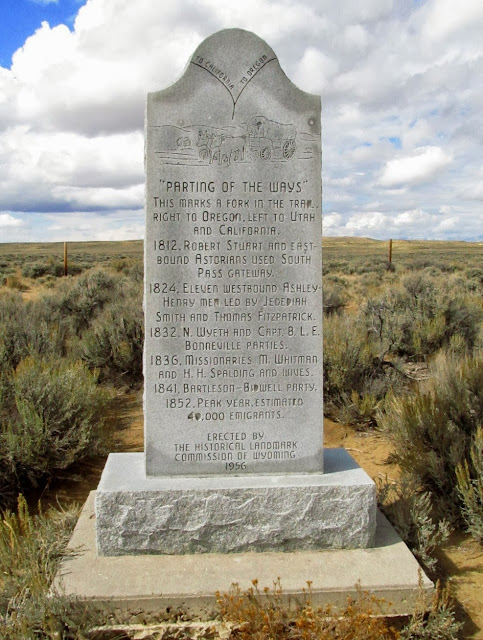 From this point, the travelers diverged.  Right to Oregon.  Left to Utah and California. 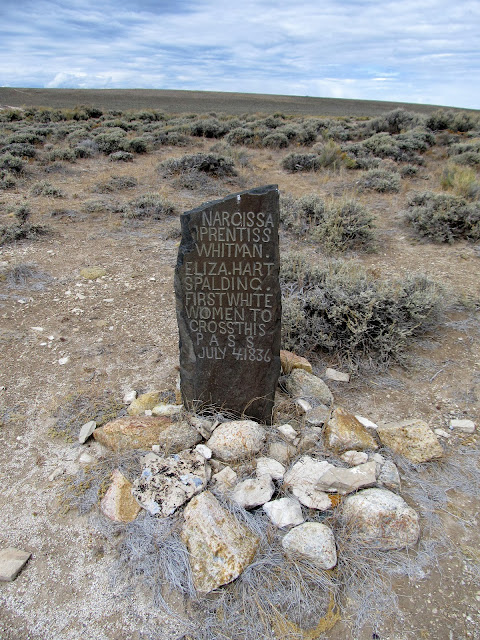 Another marker is a tribute to the first white women who crossed the west on this trail.

The route from St. Louis, Missouri to Oregon was 2000 long, hard miles.  Some ten percent of the travelers weren't strong enough and were buried along the trail. 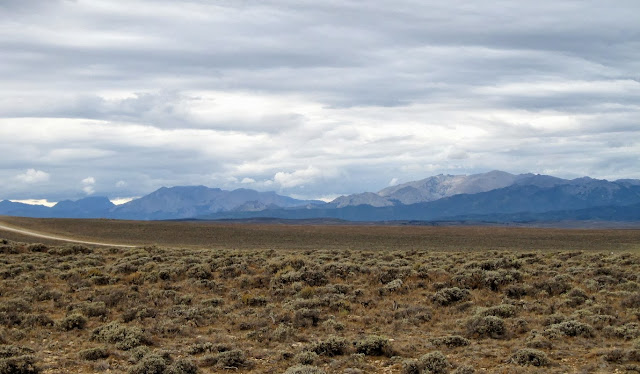 This is lonely territory, with the Wind River Range looming to the north, and miles of prairie all around.  From our comfort zone in 2013, the hardships of such a trip are difficult to imagine.
Posted by Janie at Sunday, September 22, 2013 17 comments: 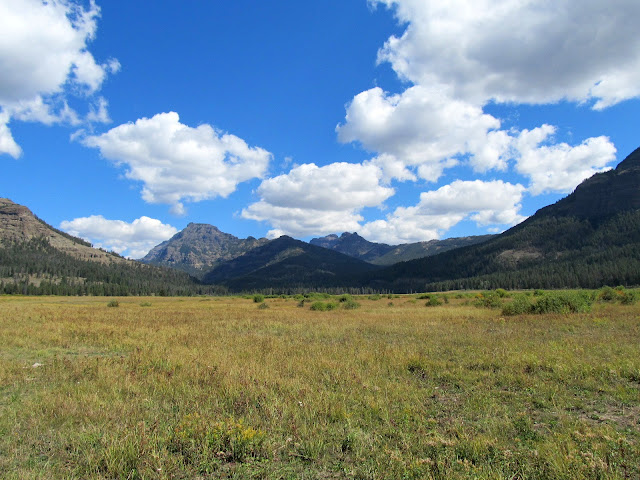 Last week, we were back in Yellowstone.  Above are the meadows along Soda Butte Creek, with peaks of the Beartooth Range rising in the background. 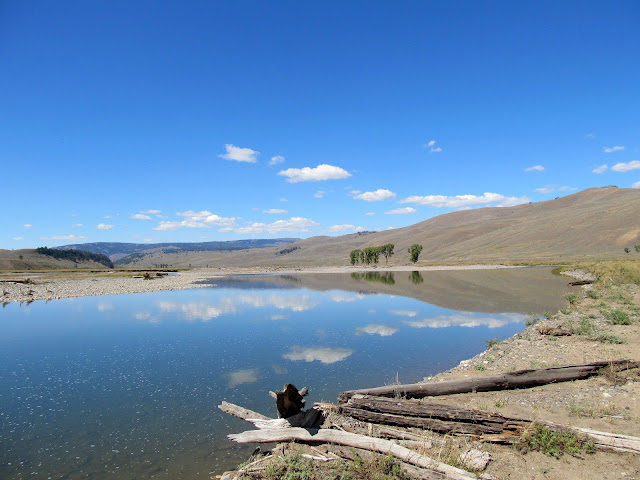 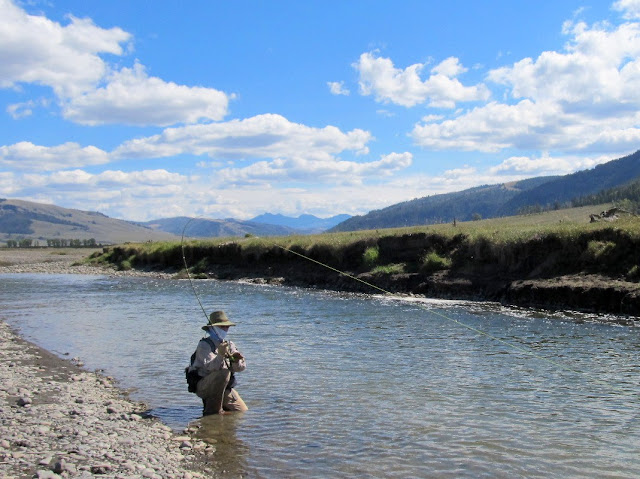 Quite a few 14-18 inch cutthroat trout succumbed to the siren call of his homemade dry flies. 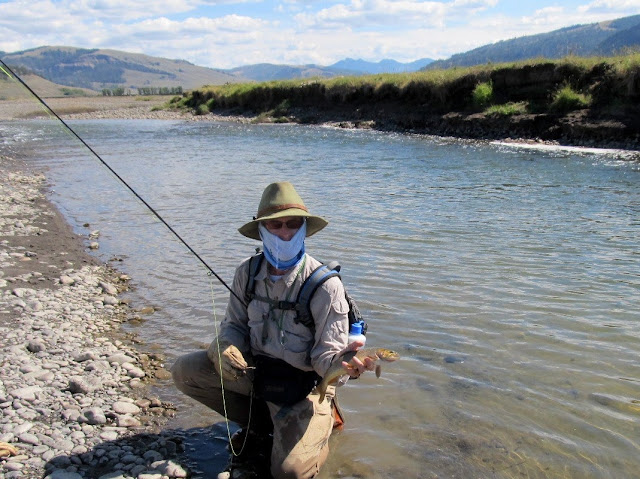 Since our last trip, he has been busily tying a supply of simply irresistible dry flies, the exact identity of which he is unwilling to reveal here.  (Hint:  not a hopper pattern.  And absolutely no night crawlers. Also, he insists that I report that he did not stoop to nymphing.) 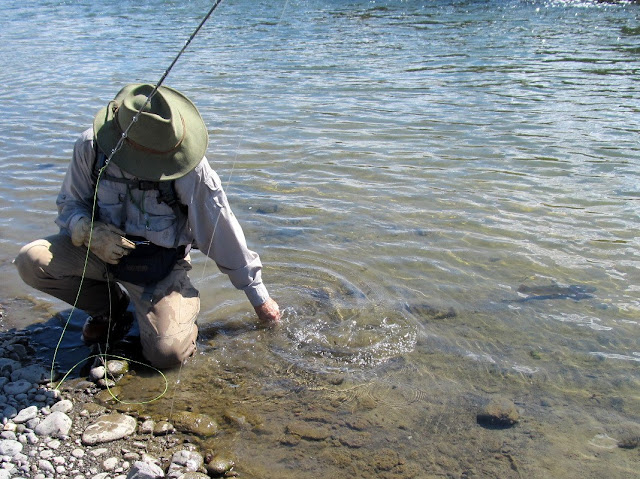 As usual, he released all trout to be caught another day. The cutthroat left a swirl of water and a trail of silt behind him as he scooted off, stage right.
Yellowstone fishing rules now require the release of all trout with any cutthroat markings. 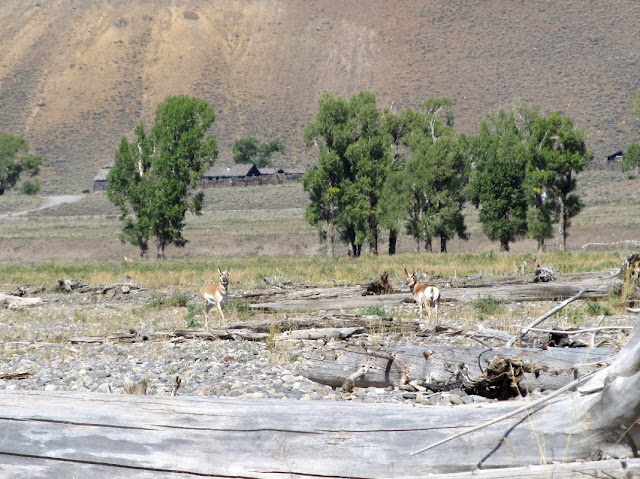 Numerous pronghorn antelope graze in the Lamar Valley.  (The buildings in the background are the old Buffalo Ranch, now called the Yellowstone Institute.) 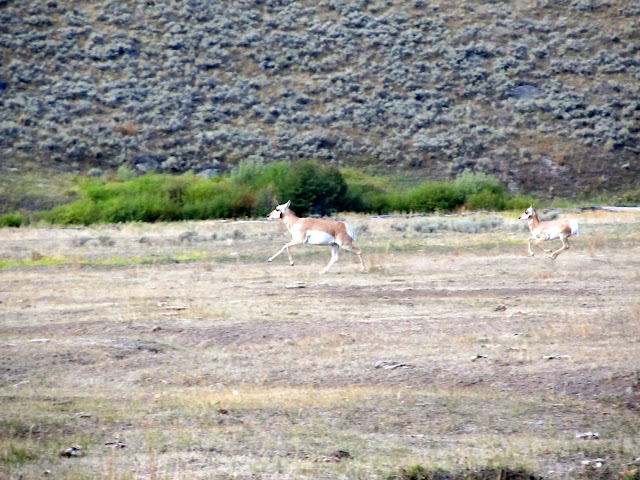 These graceful creatures will take off running sometimes, apparently just for the fun of it.  A couple of tourists, excited to share, told us these were elk.  Sadly, we had to disillusion them.  They seemed just as happy to have spotted a couple of pronghorns. 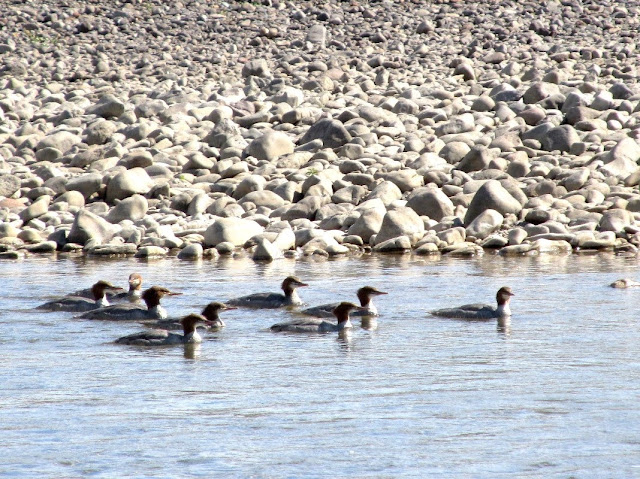 A group of common mergansers floated along the river. 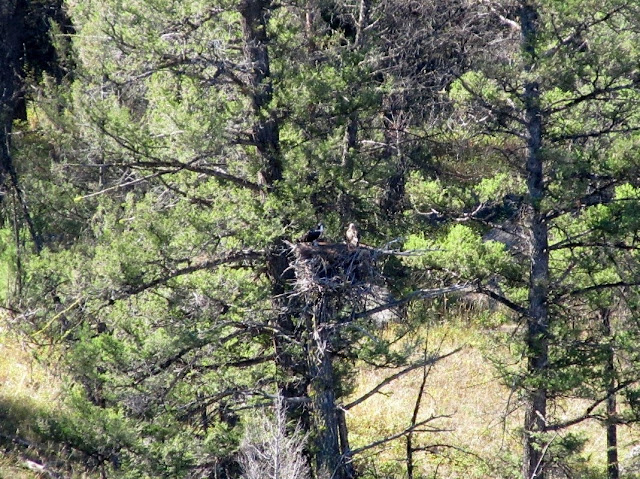 Here's the osprey nest we saw last trip.  The young osprey have fledged, but we saw a couple of them flying back to the nest, probably checking to see if mom and dad had brought any snacks home lately. 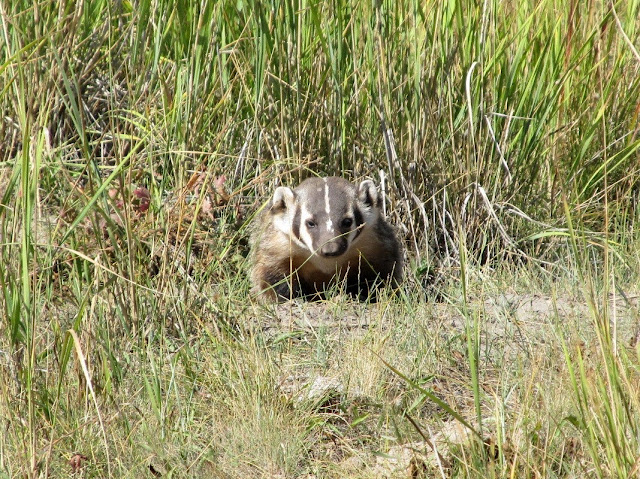 Along Slough Creek, we spotted this badger peeking out of his burrow. 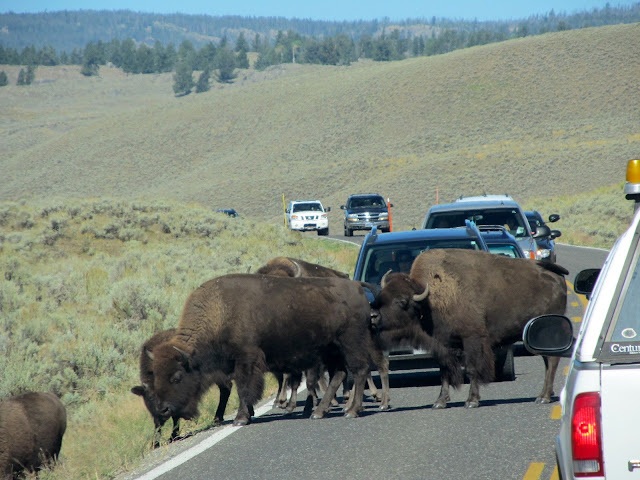 Look at that bull bison shamelessly goosing a cow right in front of all the tourists.  Why, some of them might have been impressionable children!  How rude. 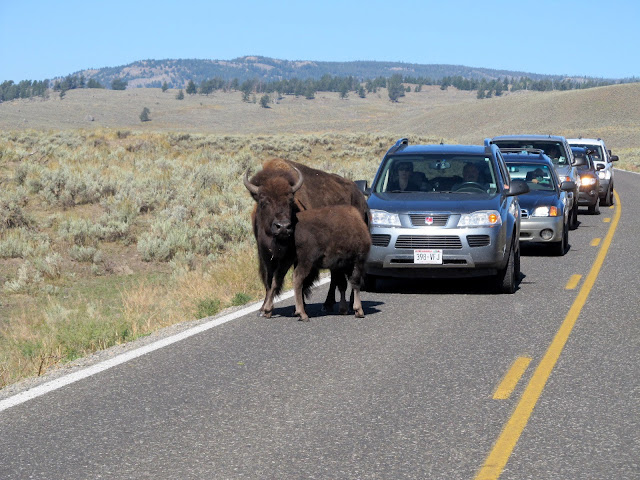 This calf decided it was lunch time.  Neither he nor mom cared if they stopped traffic while he enjoyed a long drink.
Posted by Janie at Saturday, September 14, 2013 21 comments: