As always, we went down to the Canyonlands area to enjoy warmer weather, but when we woke up on our second day, we had a big surprise.  Snow! 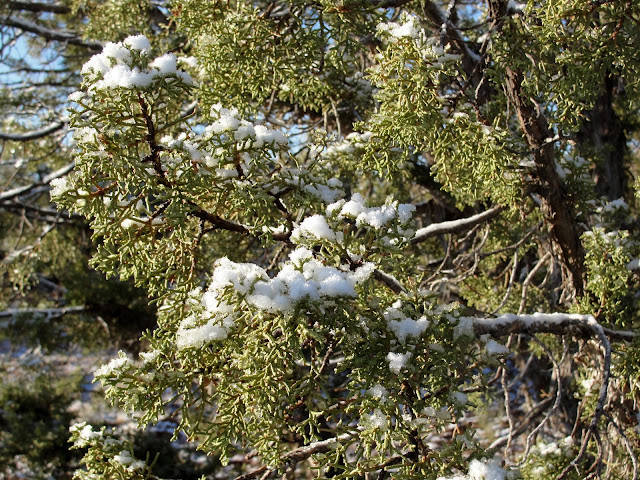 It melted before noon, fortunately for our riding plans. 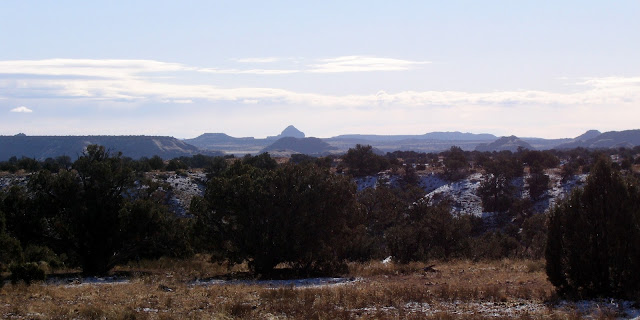 Remember the movie Butch Cassidy and the Sundance Kid

?
One of their hideout spots was down in the Canyonlands area of Utah in a place called Robber's Roost.  I posted about the Roost here.

Steve has been reading The Wild Bunch at Robber's Roost

by Pearl Baker, who managed a ranch headquartered at the Roost in the '30's.   One interesting story in the book took place near Twin Springs and North Spring.  After a little map study, Steve drew out a loop route. On our visit to Canyonlands this past week (yes, that's where we've been!)  we rode past both springs. 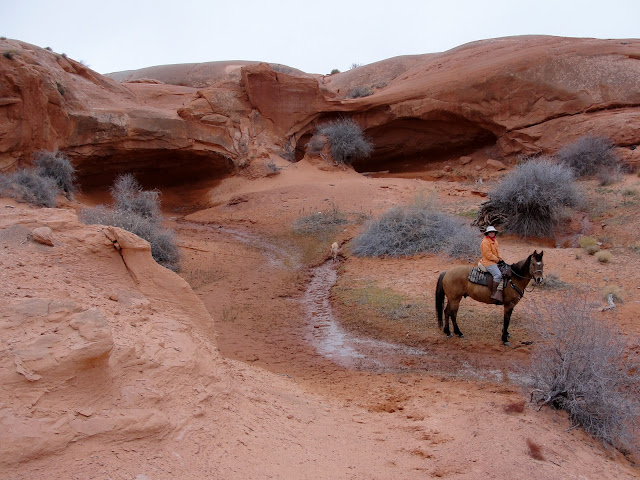 Above is a photo of Twin Springs. Water flows from both caverns.
As the story goes, a cowboy was staying in a line cabin near Twin Springs in the early 1920's.  (Butch and the Wild Bunch pulled off most of their robberies between 1889 and 1901.  Butch and Sundance supposedly died in Bolivia in 1908, but there is a lot of speculation that both survived and returned to Utah in later years.)  One evening, a stranger who appeared to be "a little on the rustle," as they said in those days, stopped by Twin Springs to water his horse and pack mule.  He seemed surprised to find the line cabin and the cowboy.  Since it was late in the day, he accepted the cowboy's hospitality for the night, but he acted nervous, especially when the cowboy happened to get near his pack. 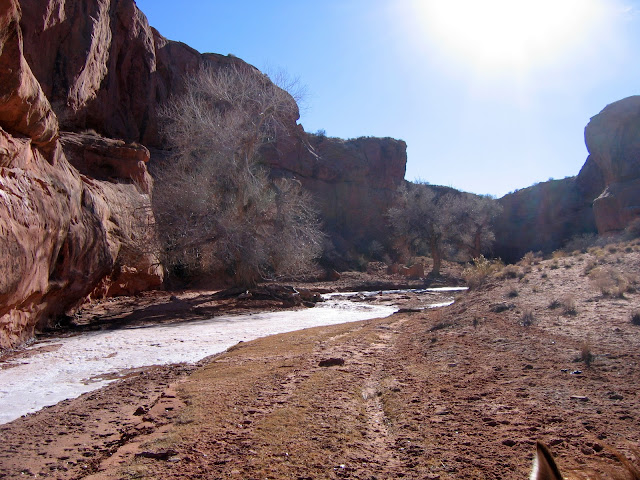 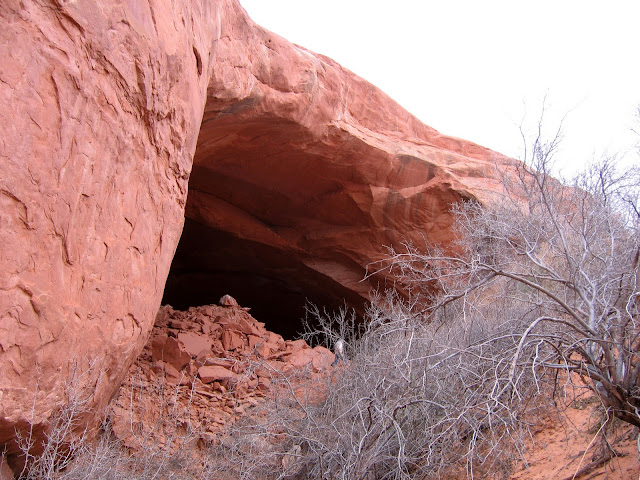 Could there still be hidden gold in them thar canyons?  Probably not, but it's rough, wild country, so anything's possible.  We found the cave pictured above while riding from Twin Springs to North Spring.  This cave didn't fit the description given in the old cowboy's tale, but it looked interesting. 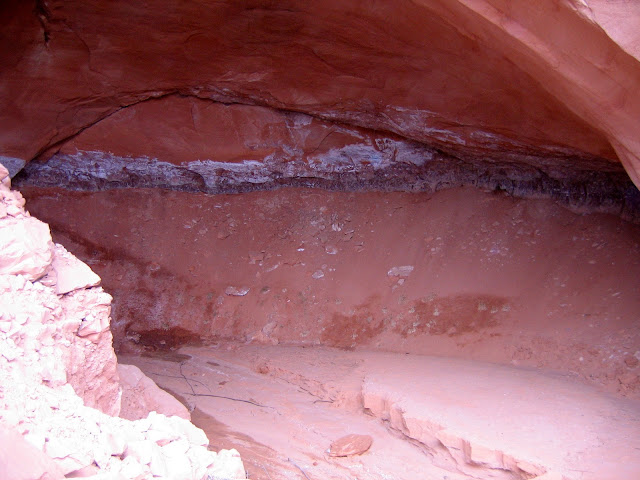 We explored a bit but didn't find any old lock boxes. 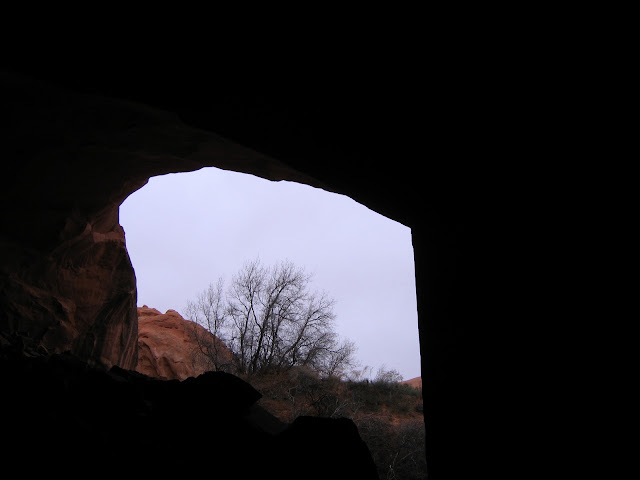 The view was nice, 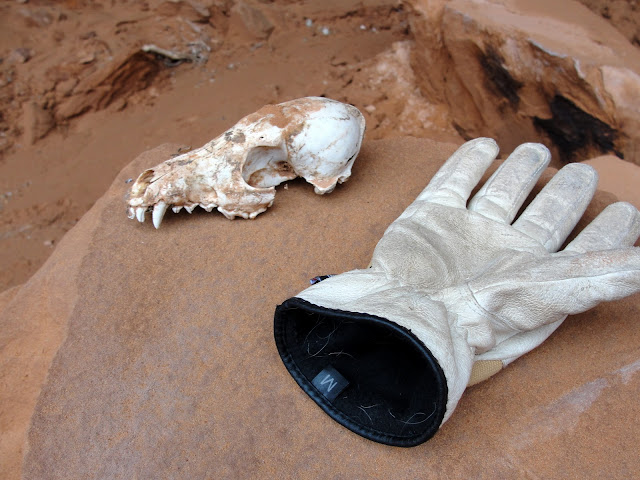 and Steve found this small skull that may have belonged to a fox.
No gold, though, more's the pity. 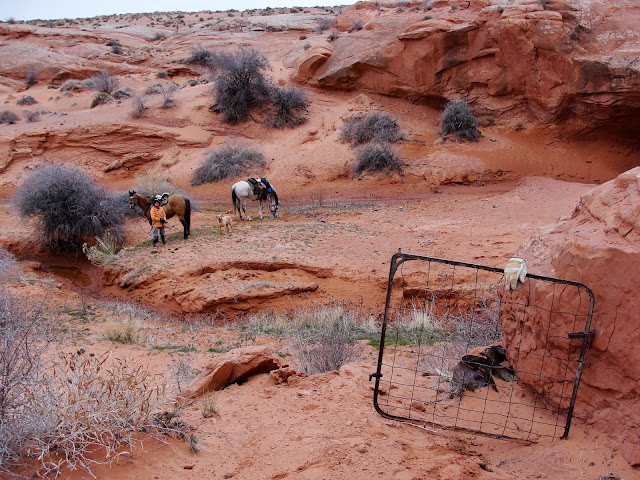 We also looked for the Twin Spring cabin but found no trace other than this old gate.  No fence, just the gate. 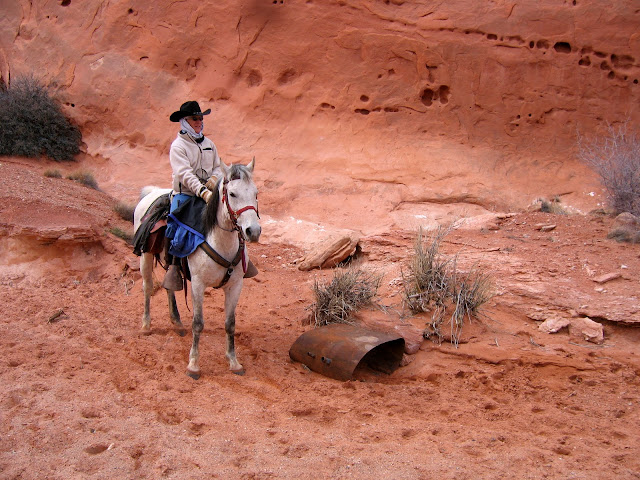 Near North Spring, we ran across, almost literally, this rusted piece of metal.  A couple of moonshiners were supposed to have operated out of canyon country. 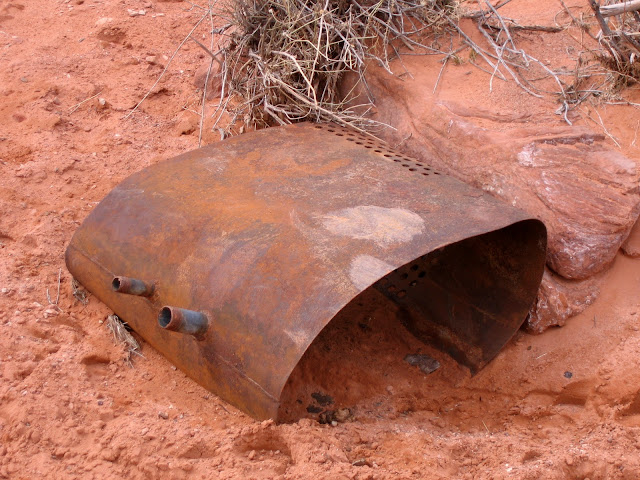 Could this modified barrel be part of  a whiskey still?  I can't think what else it would have been used for.  Any guesses?
Posted by Janie at Wednesday, March 30, 2011 12 comments:

We started reading about natural hoof care and "barefoot" riding several years ago.  One of our first sources was The Natural Horse: Foundations for Natural Horsemanship

by Jaime Jackson. Jackson's theory is that mustangs go barefoot over incredibly rocky territory in the mountain west, and they seem to do fine.  In fact, when their hooves are studied (usually after death, because nobody's picking up the feet of a range mustang!), the hoof walls are beautifully self-trimmed. This Wikipedia article  http://en.wikipedia.org/wiki/Jaime_Jackson  talks about Jaime Jackson, a man who researched wild mustangs in the Great Basin (where we live) and found that they have far less hoof problems (navicular syndrome and laminitis) than domestic horses.  He started a movement toward natural hoof care that is growing in popularity.

At first we were skeptical that horses could be ridden safely over rocks without shoes, but we did more reading on how to trim the hooves correctly.  The correct trim, as illustrated  in Horse Owners Guide to Natural Hoof Care

, again by Jaime Jackson,  is shorter than the usual trim for shoeing, and with a "mustang roll" around the outer hoof wall to prevent chipping.

Through reading Jackson's work, and also Making Natural Hoof Care Work for You

by Pete Ramey, which has a lot of "work in progress" photos of trimming techniques, we learned to do our own hoof care.  As we spent more and more time riding barefoot, we found that the soles toughen up, the hoof walls strengthen, and the horses seem comfortable going over all kinds of rocks.
At the beginning of the spring riding season, our horses are long in the toe, but we trim them back as work over rocks causes the sole to scoop out into its concave natural shape.  After a few weeks of steady riding and trimming, the hoofs look better and better. 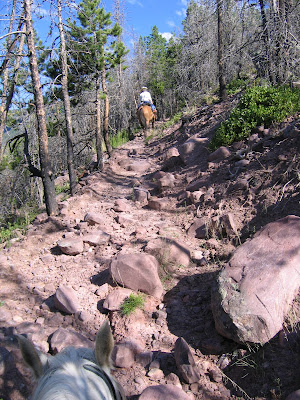 The more the horses are ridden over rocks, the tougher their feet become. Because the hoof naturally flexes (and shoes prevent the flexing), we've come to believe that barefoot is generally better for them and provides safer footing over rough terrain. 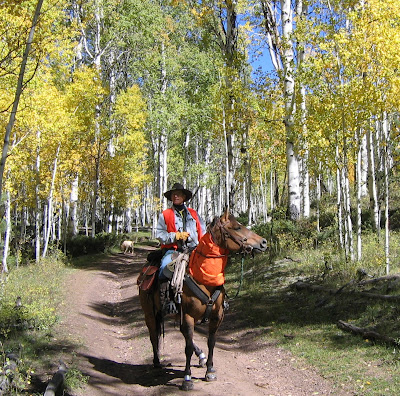 We do have front hoof boots (EasyBoot Bare are the ones we've found work best) that we use for multi day rides carrying overnight equipment over very rocky mountain terrain. We used to use them on all 4 feet whenever there were any rocks, but we've found that is unnecessary.  In fact, the hoofs do better if we use boots as little as possible.  However, we do have the hoof boots handy in case the horses show any sign of getting sore feet.
For horses ridden infrequently without adequate time to toughen up, no doubt using protection (iron shoes or rubber boots) is the best bet. Or, for horses ridden more than the 50-70 miles per week that our horses usually go, protection might be necessary to prevent the hooves being worn down too much and cause them to be tender for that reason.
We're amateurs at this and still learning, but so far going barefoot (with those rare exceptions when we need boots for extreme rocks) seems to be working out very well.
Posted by Janie at Friday, March 25, 2011 22 comments:

The Cedars (a juniper forest) near our house is finally dry enough for a long ride. 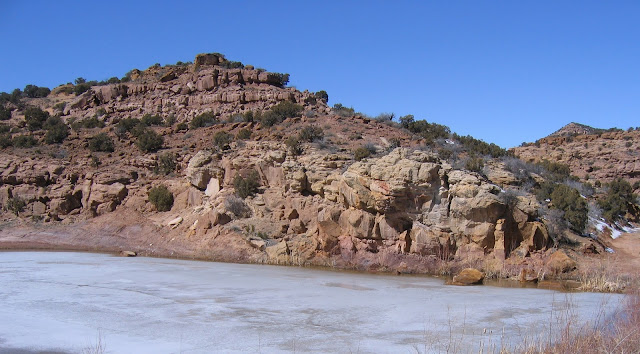 This pond is still frozen, but we hear a canyon wren singing its melody and see bluebirds flitting about. 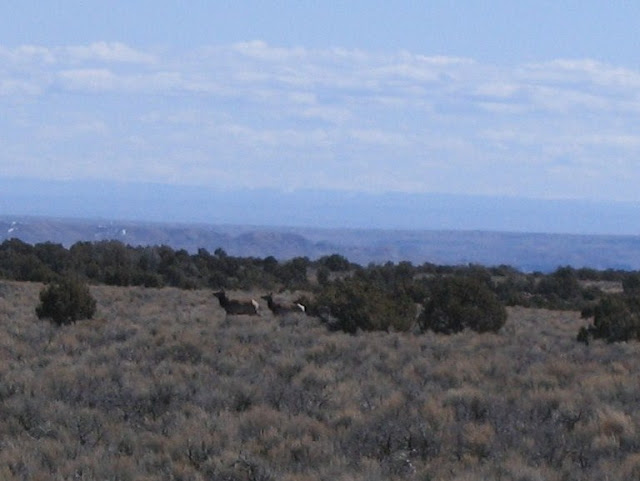 We see elk in the distance, and later, a group of deer. 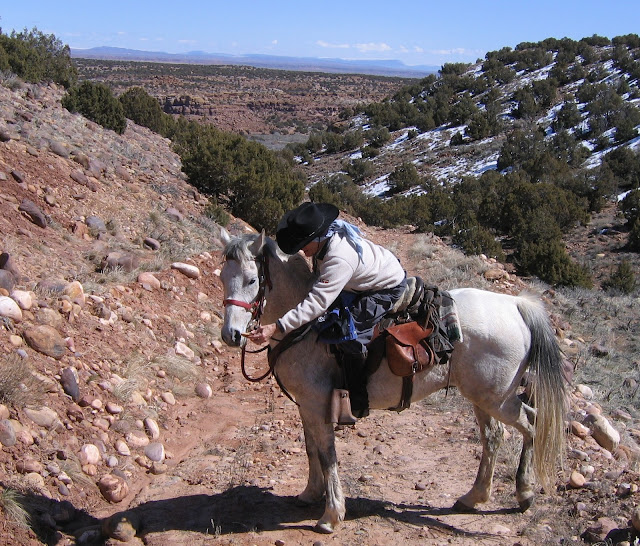 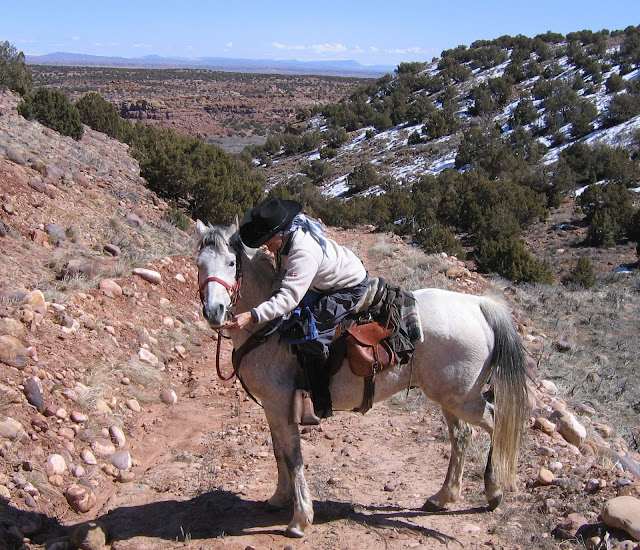 Yes, we have yet another PBJ fan in the family. 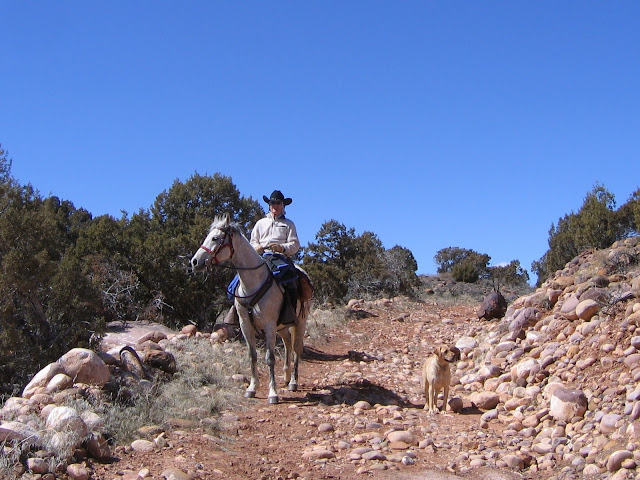 Most of the trails in the Cedars are sandy, but some have cobblerocks.

In 350 B.C., the Greek historian, warrior and horseman Xenophon wrote a book called "On Horsemanship", in which he described a method of training that is considered the basis for modern dressage. He offered many recommendations for becoming one with a horse psychologically as well as physically, and advice on preparing a horse for warfare.  (Only here can you learn "how to mount using your javelin"!)
In a section on hoof care, he suggests keeping a horse in a paddock with hoof sized cobblerocks to strengthen the hooves.  We don't have any cobblerocks in our pasture, but riding over rocky terrain serves the same purpose.  Cobblerocks are great for barefoot hoof conditioning. 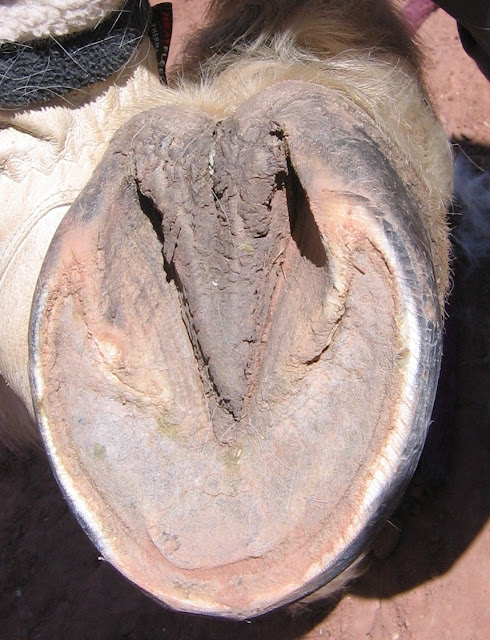 The hooves are looking good, with tough soles and strong hoof walls.   We'll be ready for rocky Uinta Mountain trails this summer.
Posted by Janie at Wednesday, March 23, 2011 15 comments: 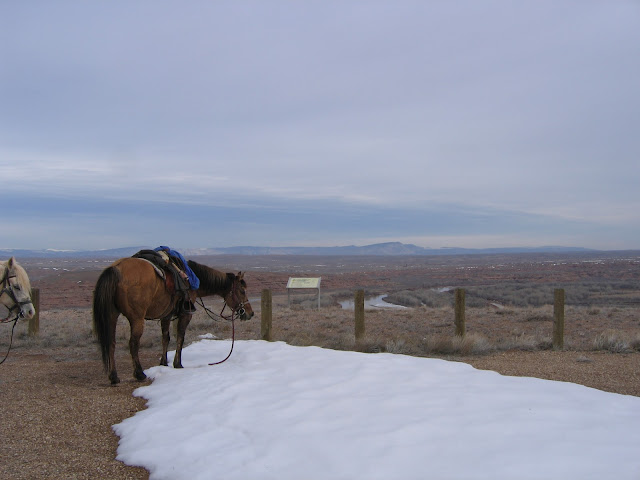 Finally, we have a place to ride locally.  The dirt roads are clear, with the ground still moist and soft.  The above photo was taken at Leota Overlook with the Green River below us.  As you can see, one big patch of snow remains. Both horses are looking a little rugged, still hairy, and sweaty from a run up the hill.
We saw a big group of Sandhill Cranes down near the river, but the photos didn't turn out. 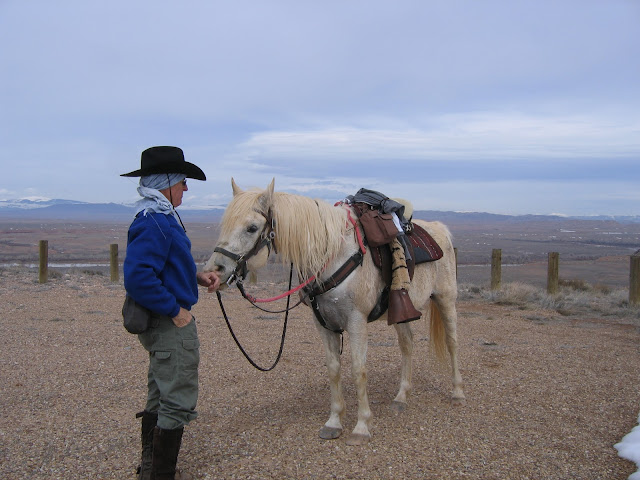 This was Mischief's first ride this year.  (He's older, so I haven't taken him on the multi-day rides in Canyonlands.) He seemed to enjoy going for a run.  On his break, he checked out Steve for treats.
Posted by Janie at Monday, March 21, 2011 23 comments: 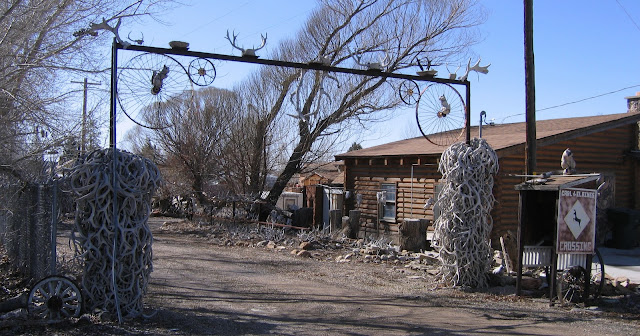 We drove by this house on our way to Canyonlands and just had to pause for a photo.
Posted by Janie at Saturday, March 19, 2011 15 comments:

Can you see the old corral constructed of juniper trunks and limbs? 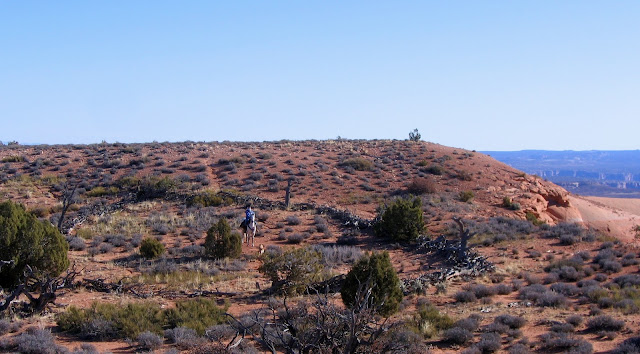 Steve, Coco and Daisy are standing in the middle of it.
Here are a couple of views from the last few miles of the Spur Road: 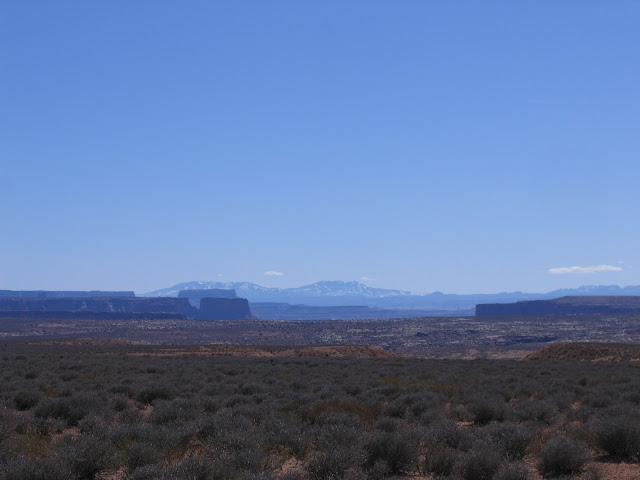 We rode 14 miles (28 round trip) down the Spur "road" to reach this view.  We stopped driving when the road got too bad for a horse trailer, and the 14 miles of riding didn't take us all the way to the northeast end of the Spur overlooking the Green River.  Time constraints, lack of water, and generally tired explorers called out "enough" for one day.
A high clearance 4WD can probably negotiate all of this old road safely, but we didn't see anyone trying it.  Then again, we didn't see anyone else trying it on horseback, either!
Posted by Janie at Wednesday, March 16, 2011 20 comments:

Flora of the Spur 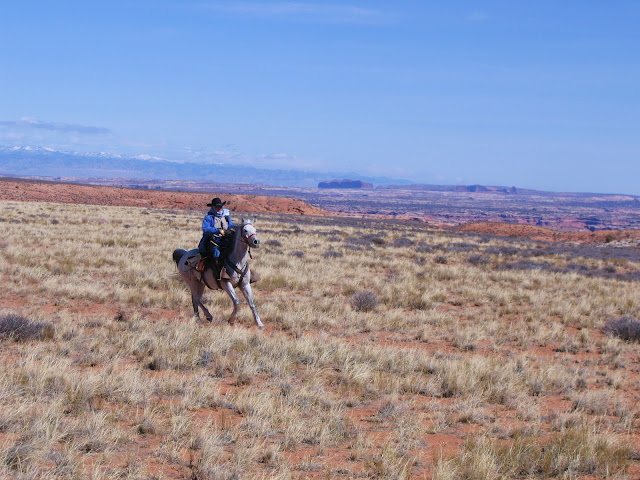 On the Spur Road north of Canyonlands Maze District and Glen Canyon National Recreation Area, the mesa extends over 75 square miles.  (The photo above looks north toward the Book Cliffs in the distance and Determination Butte, the reddish cliff in the background.)
Much of the grassland offers good forage, but not many animals graze on it because water is so scarce.
Native bunch grass is abundant, such as Indian ricegrass: 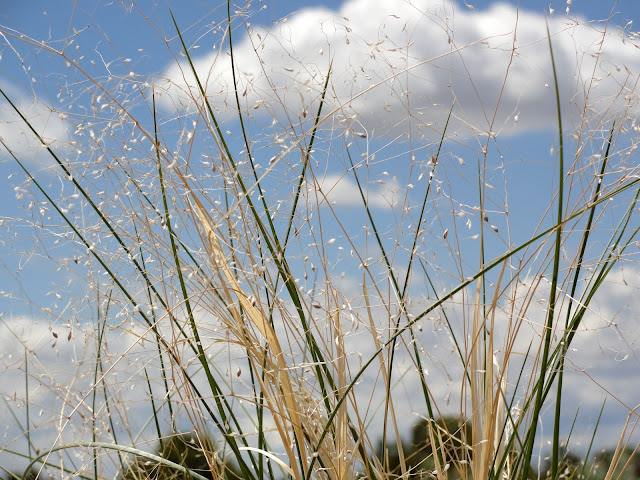 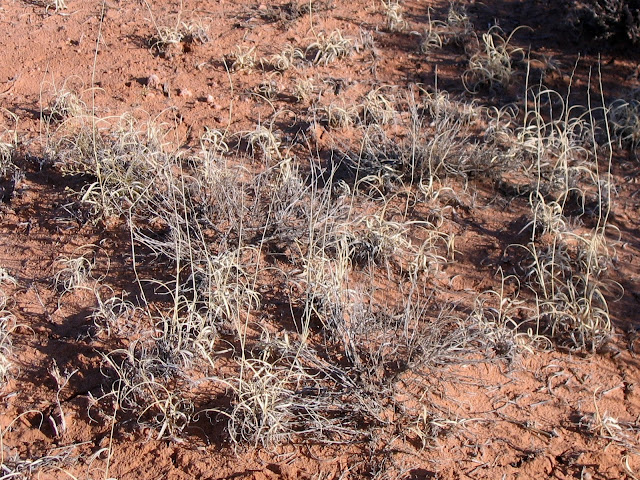 In some areas, blackbrush (a gray color, leafless at this time of year) and Ephedra nevadensis(Mormon Tea, the green plant shown below) preside: 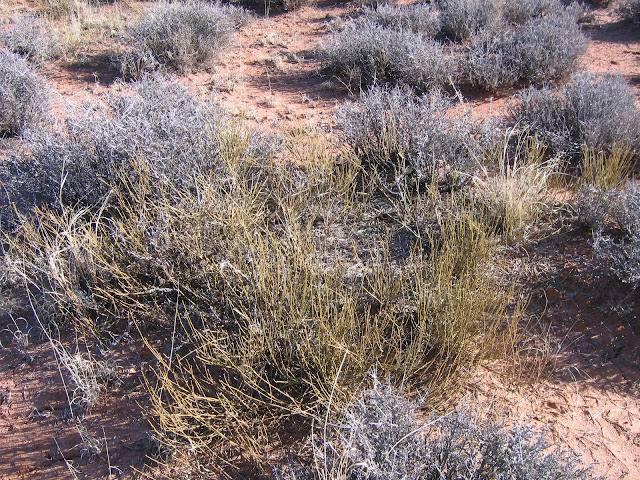 The tea made from this Ephedra plant contains no caffeine and although some species contain alkaloids such as pseudoephedrine, this one does not. Here and there on the prairie, you'll find patches of prickly pear and the occasional spiny yucca plant. 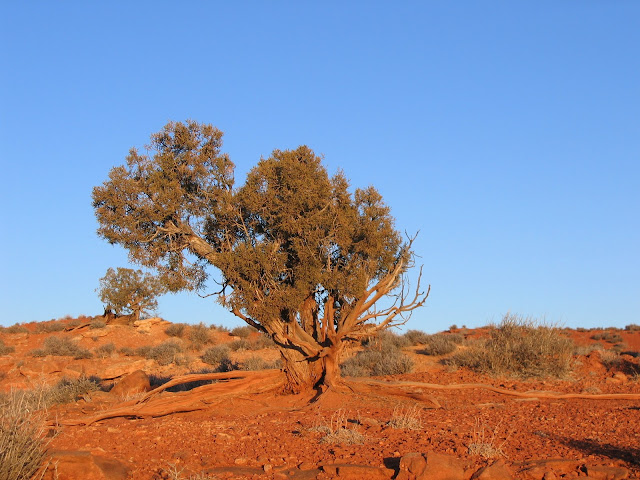 The primary tree that grows in this area is the juniper. Junipers require an extensive root system to survive in their desert home.  The lateral roots can reach out 100 feet in search of moisture, and the tap root can go 25 feet straight down.  These trees are slow growing, living an average of 350-700 years, and occasionally more than 1000 years.  The junipers' twisted limbs add character to the landscape.
Posted by Janie at Monday, March 14, 2011 16 comments: