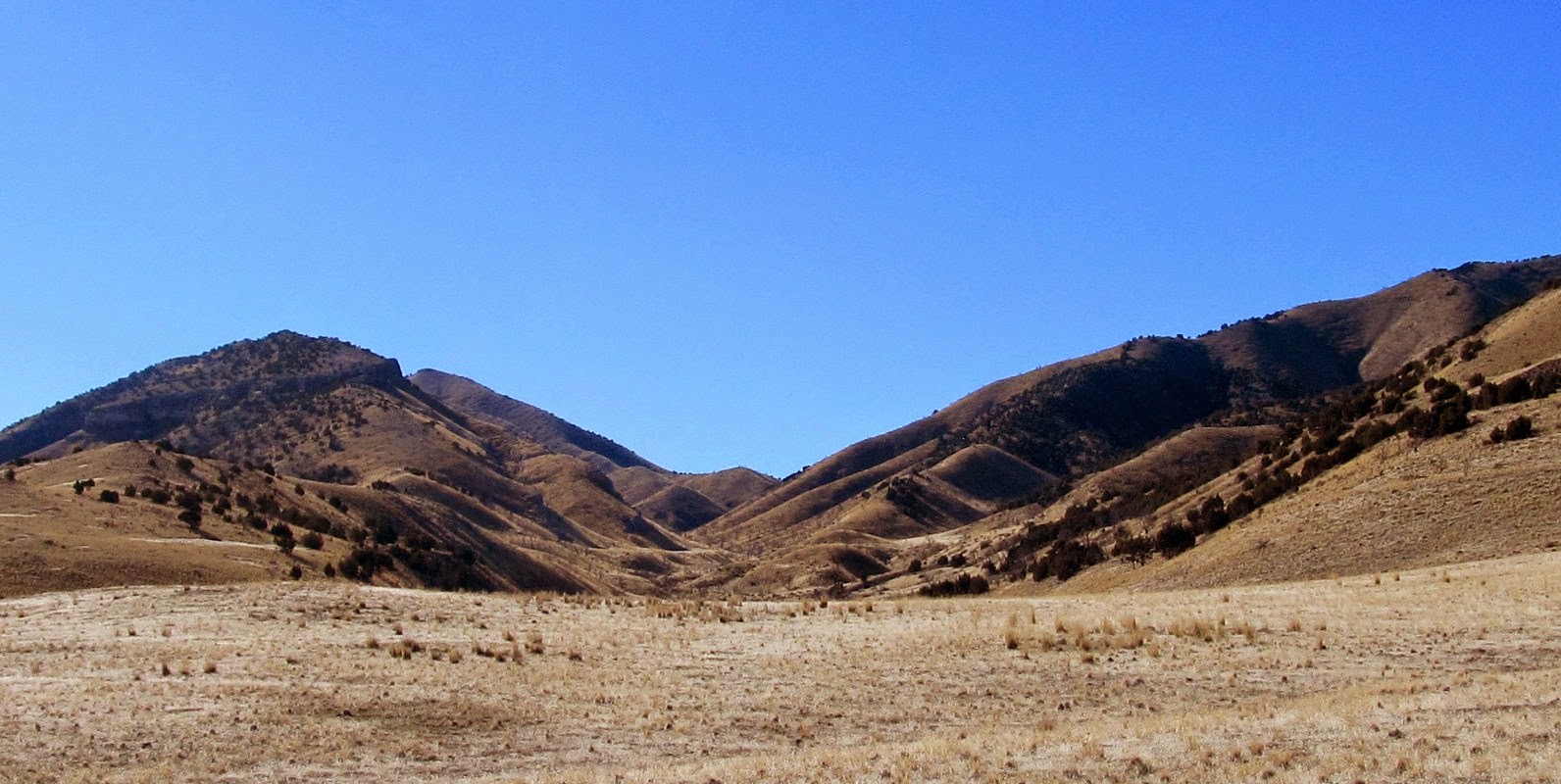 Now that we've moved to the Wasatch Front, we're exploring new territory.  One of our first rides from the new base camp was in the Cedar Mountain Wilderness, located about 50 miles west of Salt Lake City. 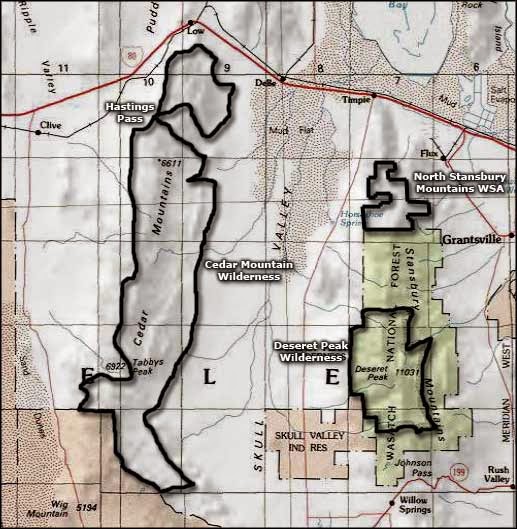 Our destination was Hastings Peak, on the northern end of the range.This 6700 foot peak is named after Lansford Hastings, who first led a wagon train group to California via the Cedar Mountains on a trail known as Hastings Cut-Off, which travels south of the more commonly used Oregon Trail.  The ill-fated Donner Party planned to travel to California with Mr. Hastings as their guide, but they fell behind the main group.  They decided to try the Cut-Off on their own.  Unfortunately, road building through the Wasatch Mountains followed by a grueling trip through the Great Salt Lake desert delayed them by several weeks.  They traveled through a pass near Hastings Peak and on to the Sierras.  They reached the Sierras in early November, when they were trapped by a snow storm.  They spent the winter at what was later named Donner Pass.  Only a few of the party survived, and those mostly by cannibalism. 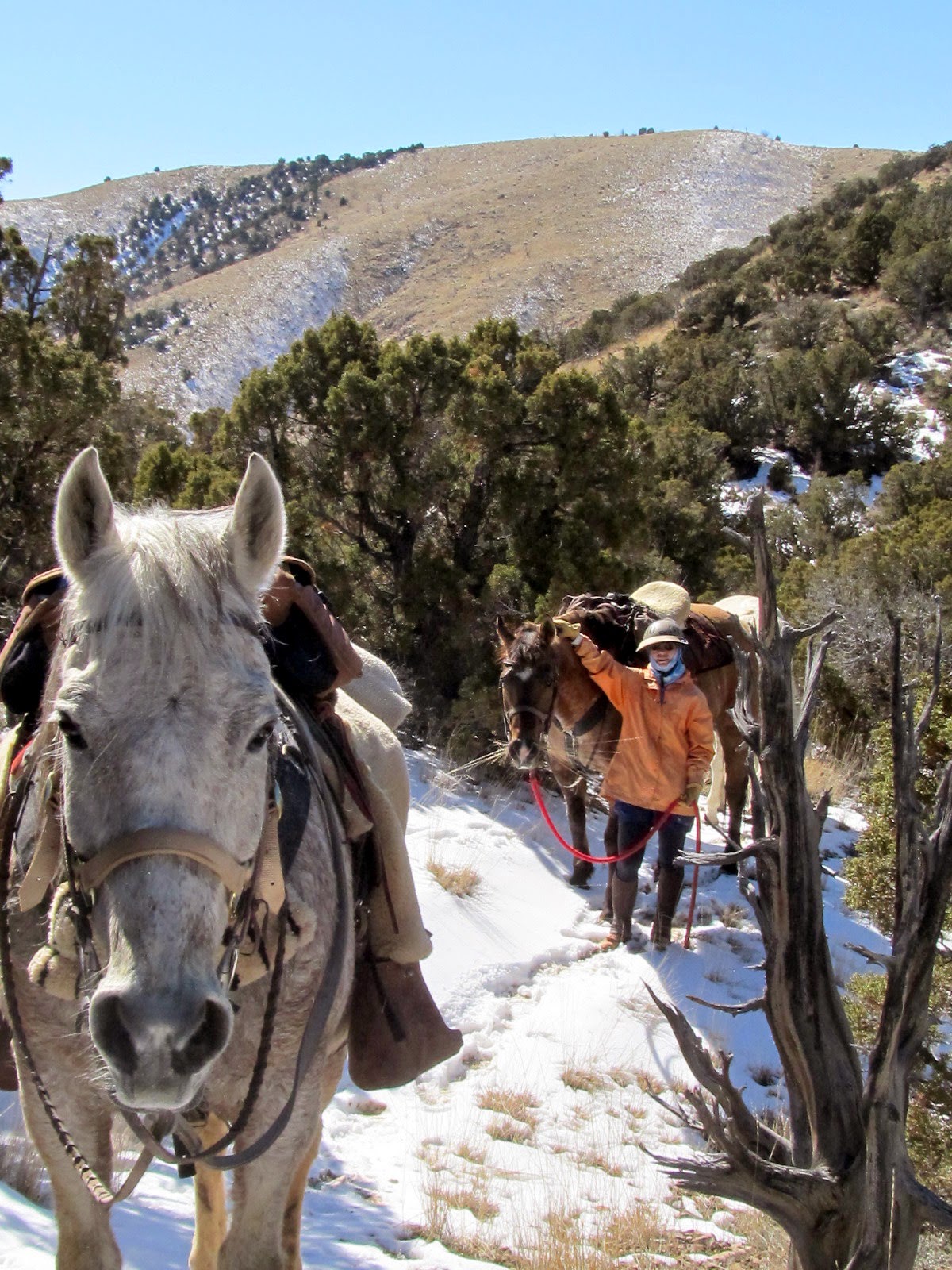 On our much less rigorous journey, some snow remained in the shaded canyons. 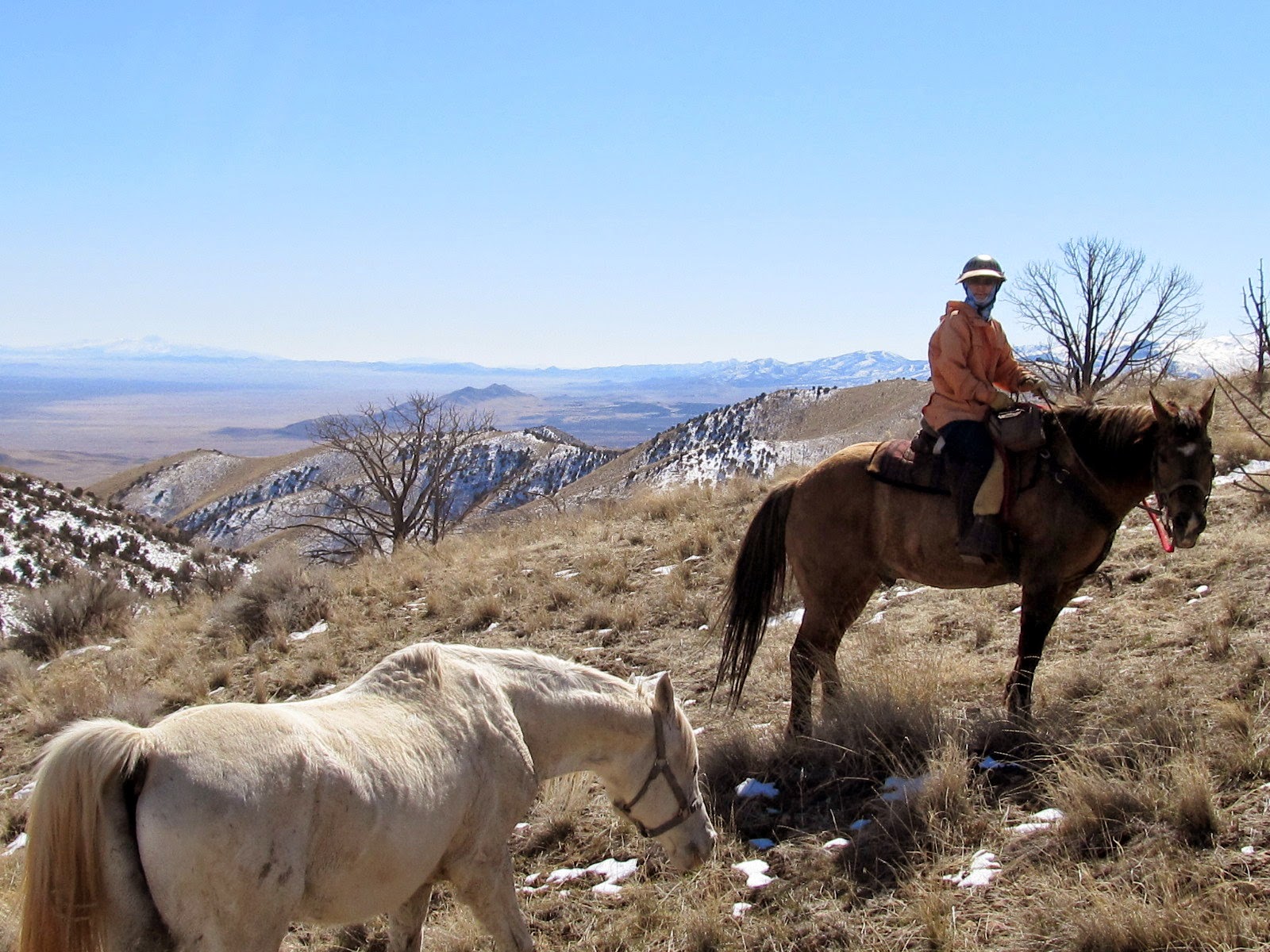 Mischief huffed a little as he followed the rest of us on his own.

The view across a desert valley to the west was beautiful.  We could faintly see Pilot Peak, which the Donner Party and others who took Hastings Cut-Off used to guide them west. Unfortunately, the peak doesn't show up in our stitched photo. 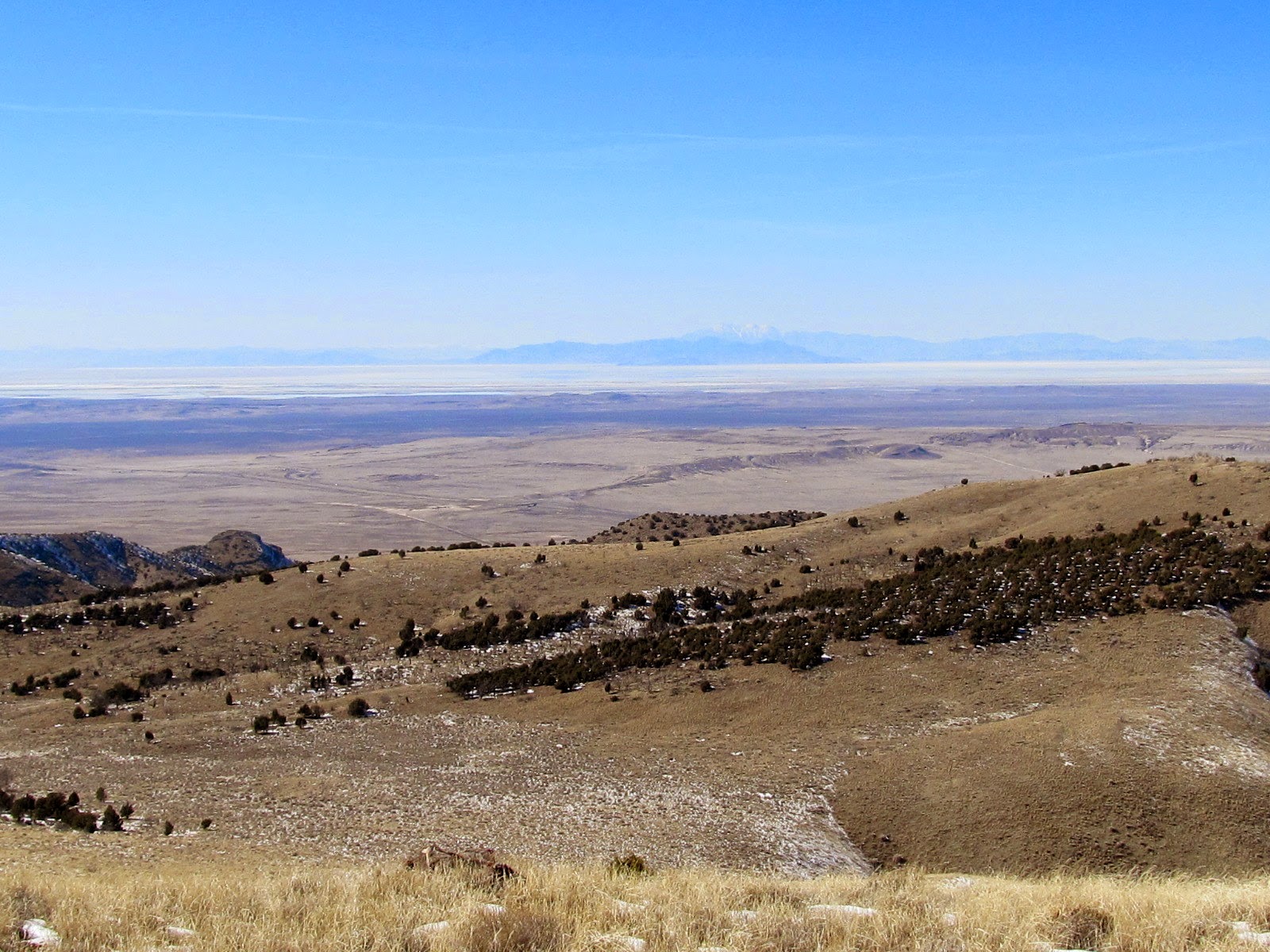 If you have really good pioneer eyes, maybe you can see Pilot Peak near the middle of the above picture.

In the photo above, the Stansbury Mountains are on the left, and the higher mountains of the Cedar Wilderness are on the right . 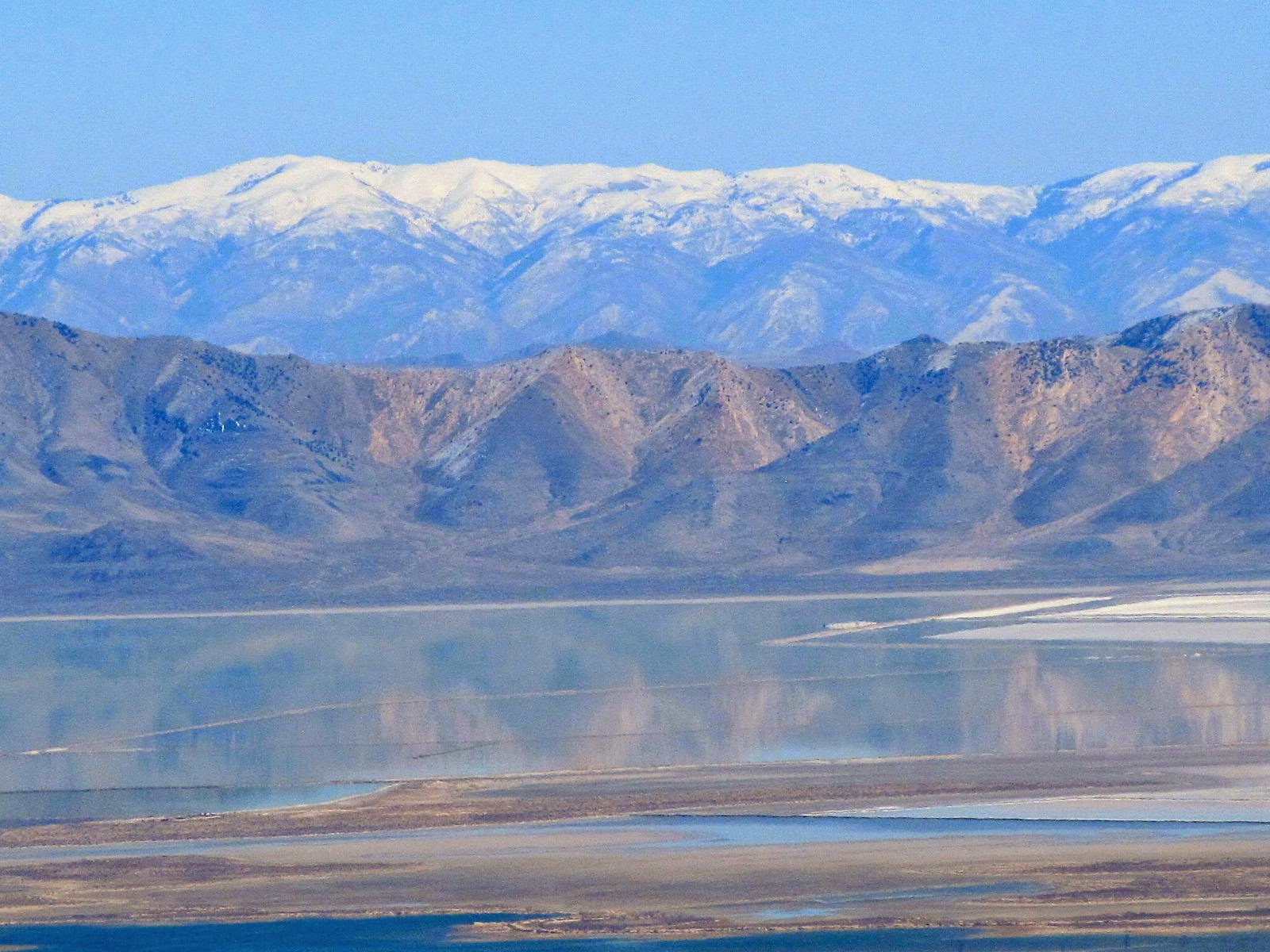 On the way down, we saw Stansbury Island reflected the Great Salt Lake, as shown in the zoomed-in photo above. 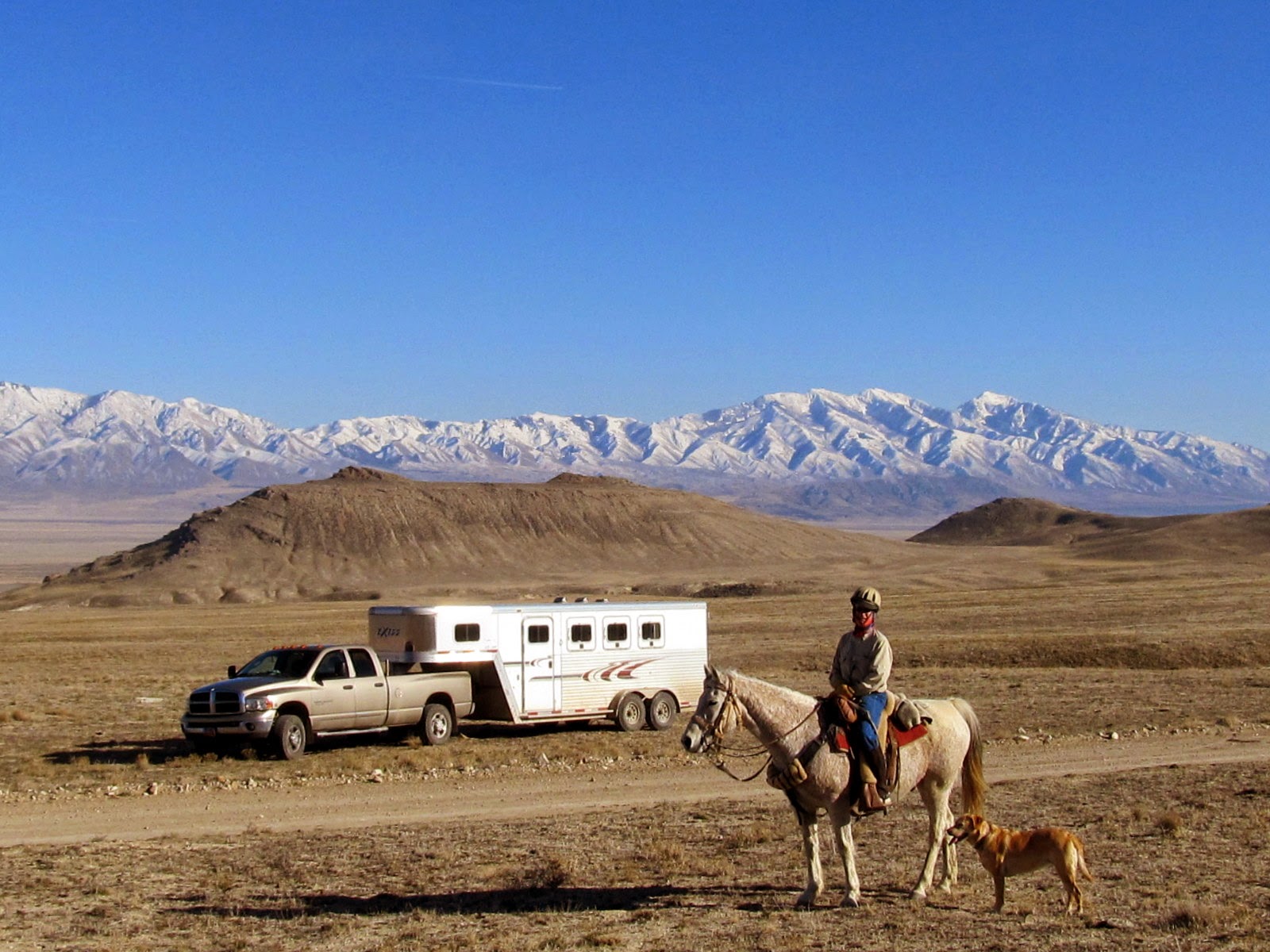 Back at the trailhead, the snow-covered Stansbury Mountains rose above the trailer and the valley floor.
It's a beautiful area with 100,000 acres of public wilderness land.  The Cedar Mountain Wilderness Area does now allow vehicular travel, so it makes a great place to ride.
Posted by Janie at Sunday, March 15, 2015