Water is the Desert's Gem

On an early October trip to southern Utah's San Rafael Desert, we began a ride  the Horseshoe Canyon Unit of Canyonlands.  Horseshoe Canyon (sometimes called Barrier Canyon) features the world famous Great Gallery, a panel of ancient native American petroglyphs. The trail into the canyon follows an old roadbed blasted out of the sandstone  in 1929  This time, we followed the road out of the canyon to the east, where it is mostly washed out, but enough of it remains for a horse or hiker to follow.
After crossing Horseshoe Canyon, we rode 15 miles across old 2 tracks and trailless desert to reach what is known as the Spur.
From the air, the bends in the Green River create what looks like the rowels (points) of a spur.
From the Moab side of the river (east), each rowel looks like a peninsula sticking out in a river bend. Last week, we were on the west side, up on one of those peninsulas.
As we neared southernmost rowel of the Spur, the horses were ready for a drink.
The lighter green tree, a cottonwood, in the left middle of the photo shows us where to look, although Steve had already scouted out the waterholes on Google Earth.  We needed to be fairly certain water was out there before making the ride.
Here's that tree, close up, where a pool of water awaited us.  Boss and Coco enjoyed a nice long drink.  Shortly after this photo was taken, Boss moved on into the pool, reaching belly deep in a few steps.  He intended to go swimming, but I was able to turn him around before he got carried away and soaked his saddle.
We rode out onto one of the rowels of the Spur for a view of the river.  We dubbed the area Pothole Spur, because it was covered with potholes filled with water from a recent rain. 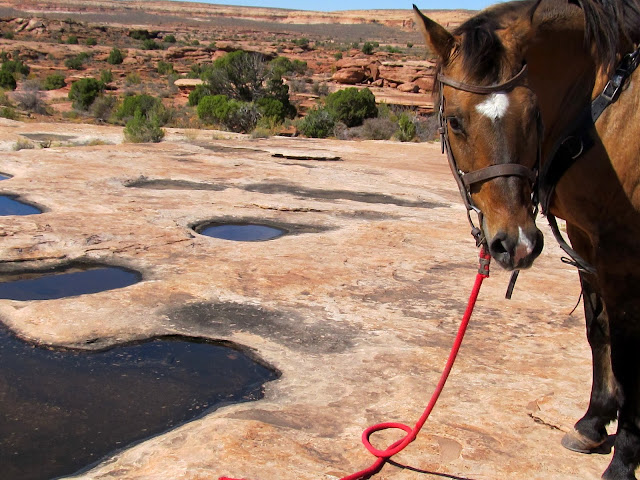 Boss looked at one of the potholes, then at me, as if to say, "How the heck do you expect me to go swimming in this?" 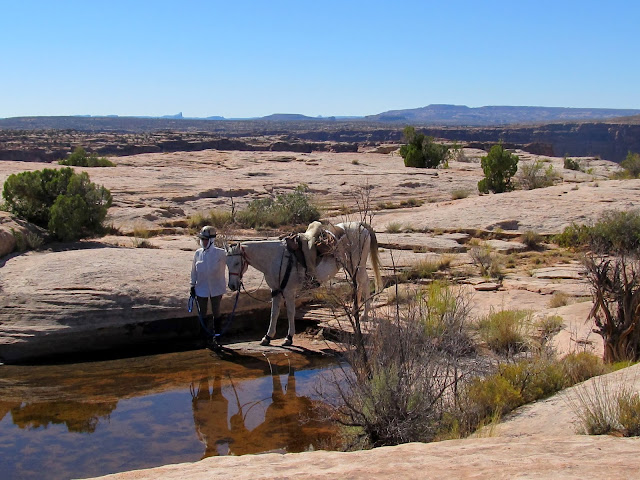 Some of the potholes were more sizeable, but not deep enough for Boss to get his belly wet. 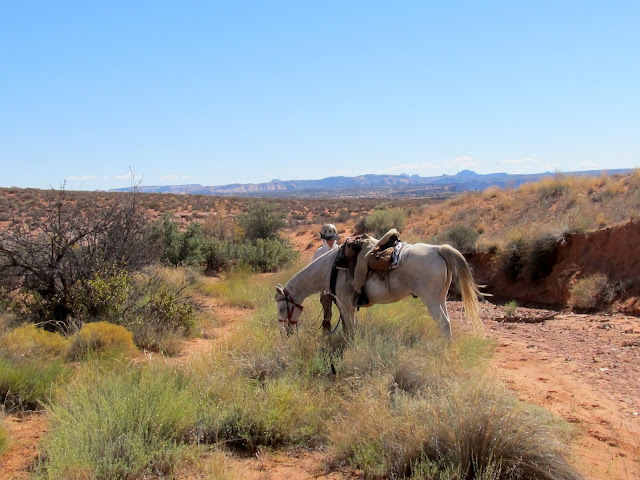 Some areas have good grass.  No cows graze on the Spur, and even the burros don't venture out there very often, possibly because the water holes are so scarce.
We did see quite a few jackrabbits, and as we explored a small canyon, we surprised a large owl, probably a Great Horned Owl, which are said to be fairly common in the Canyonlands.  The land between Horseshoe Canyon and the Green River, known as The Spur, encompasses well over 50 square miles.  All of it is nearly untouched, lonely and wild.
Posted by Janie at Monday, October 12, 2015 10 comments: Links to this post