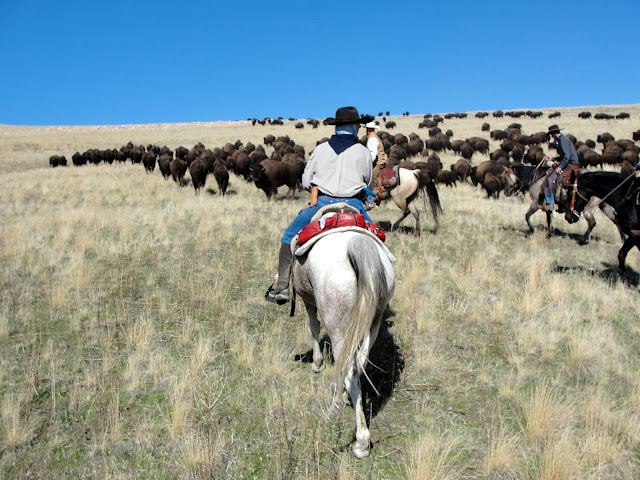 On Saturday; we joined about 200 riders in the 30th Annual Bison Roundup on Antelope Island.
Bison are not like cattle.  For one thing, they're a lot bigger and stronger.  For another, they're a lot more likely to turn back on the rounder-uppers if they don't like where they're headed. 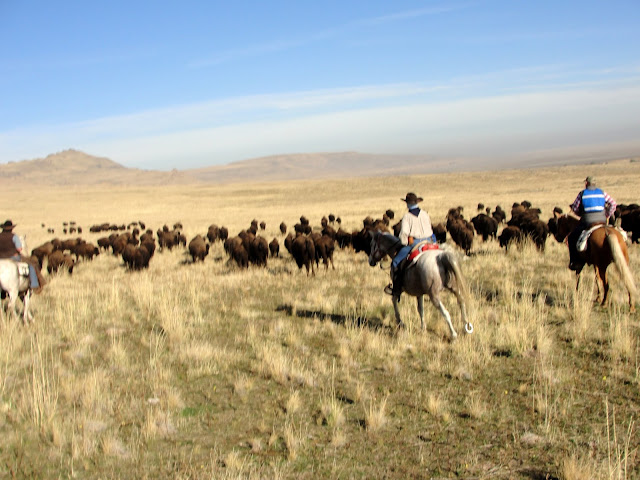 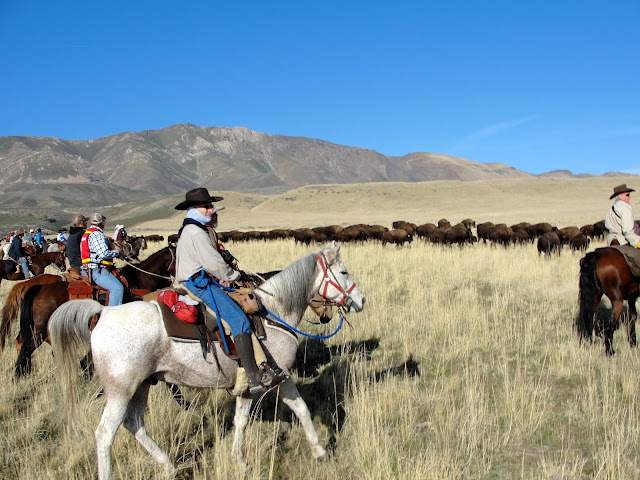 The riders in red vests were our "shooters"  They're armed with pellet guns, aiming to head off any crazy bulls who go after an unlucky rider with insufficient room to escape a charge. Those in blue vests are team leaders.  We were supposed to stay in teams, but the groups got mixed up pretty quickly, and most folks lost track of their leaders.  We just listened for the shouted instructions from those in blue who had radios and knew when and where to go.
The rider coming behind the herd at full gallop is swinging a bull whip.  There were a half dozen or so of these guys, all excellent riders.  Whips snapping.  Riders shouting, whistling, waving arms and hats.  Bison grunting. Horse and bison hooves thundering.  Horses whinnying, We felt like we were living in a "Rawhide" episode, except with bigger and noisier animals to herd.
We witnessed several bulls sparring with each other, sometimes looking back at us with disdain and perhaps more than a hint of threat. We all kept an eye out for bulls that got huffy and turned with angry snorts. 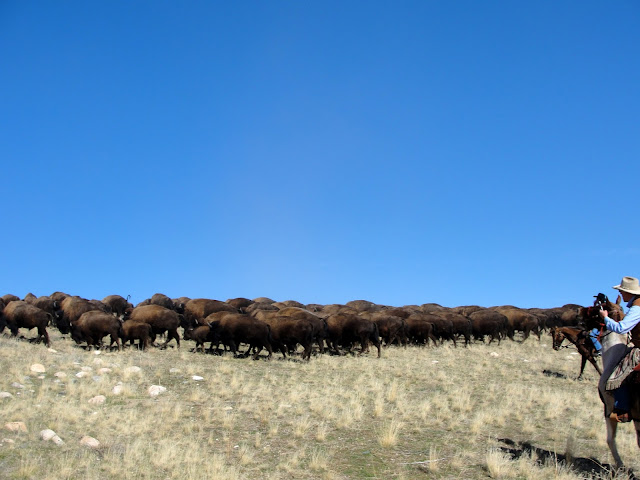 Well, most of us kept an eye out.   Others got a little carried away taking photos...
Some entertained themselves by chasing the half dozen coyotes that roamed beside the herd.  A group of antelope raced ahead, trying to escape the confusion.
We herded for a couple of hours, covering close to 8 miles and joining several small herds together as we went.

When we had about 400 head gathered in a grass-covered valley, the trail bosses called for a lunch break. 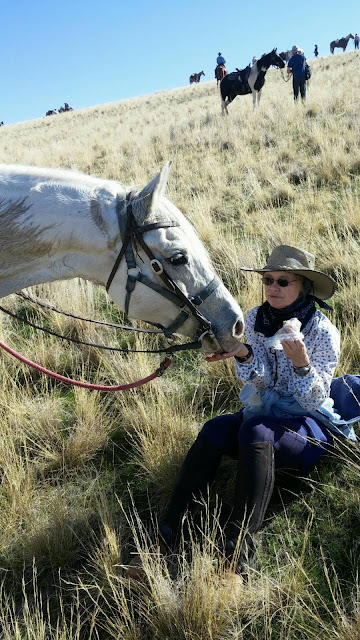 I ate a sandwich, sharing my PBJ with Mischief. 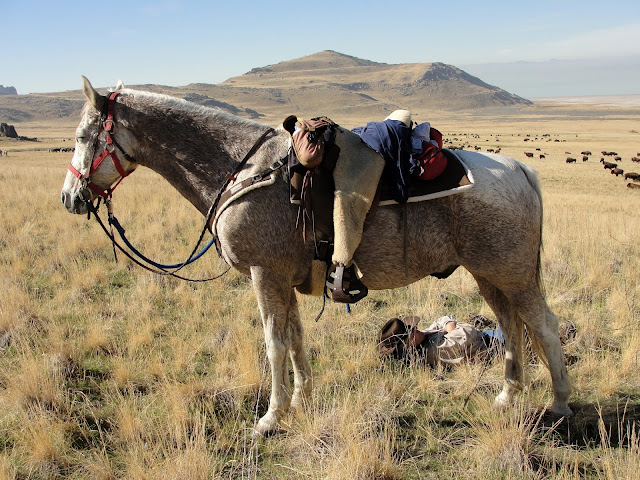 Steve and Coco took a nap. 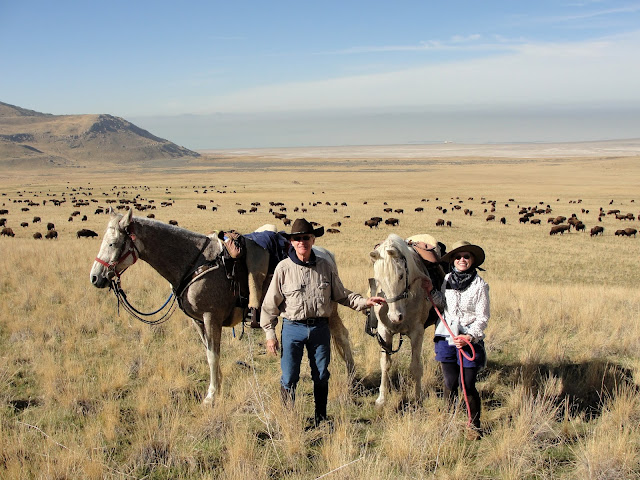 A neighboring rider took our photo just before we mounted up for the last big push to the corrals.
We rode hard up the last hill.  Some of the bison broke away and ran off onto the salt flats.  Just as the rest of the herd was reaching the top of a hill, we looked back to see about 75 bison thundering up the hill toward us!  Fortunately, we had enough time to escape. 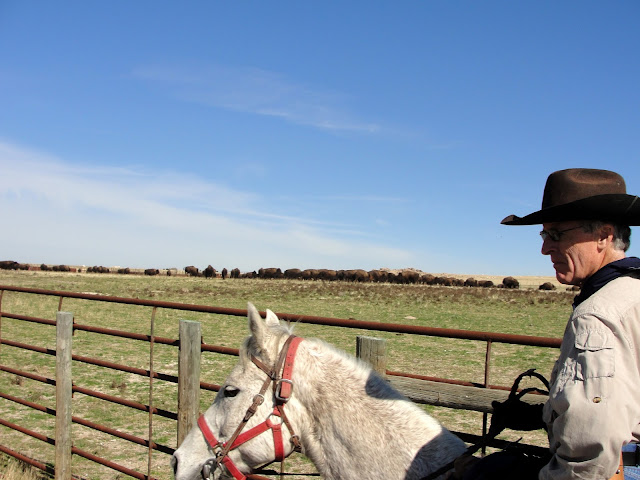 Steve surveyed the corrals after the animals were all penned.  A few minutes later, a couple of accidentally penned antelope came running back to the gate.  The gate-keeper opened up and let them out to run free once more. 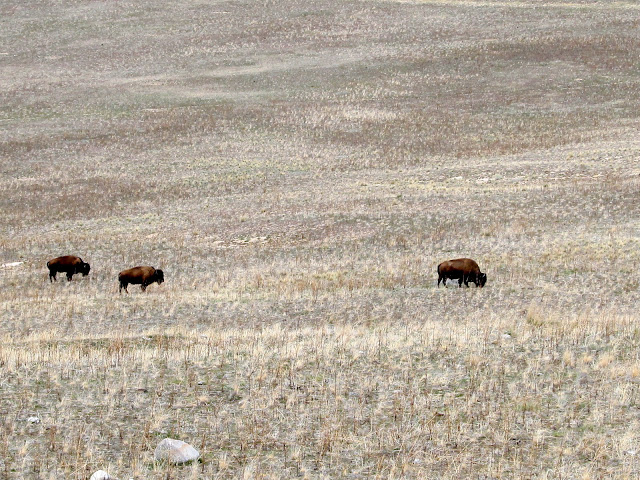 Not all of the bison were captured.  Many of the larger lone bulls keep to themselves and will continue to graze, unharrassed.  The penned animals will be vaccinated and examined next weekend.  About 200 will be sold.  The island could easily become overgrazed if the herd grew unchecked.  A yearly thinning is necessary for the health of the animals and the ecological health of the island. 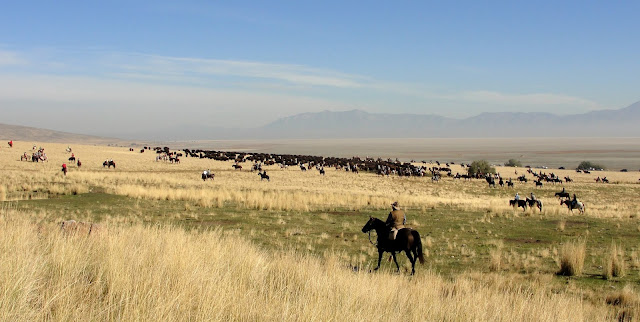 If you look carefully, you can see a long chain of vehicles along the road.  Many people came to observe the excitement and semi-chaos as we pushed the herd over the hills.  At the end of the line, near the pens, more observers waited to snap photos and cheer us on.  Before the ride even started, a couple of Chinese ladies asked Steve and Coco to pose for a photo with them.  They claimed the Bison Roundup is "world famous."  Maybe.  It's certainly unique and an amazing adrenaline high. 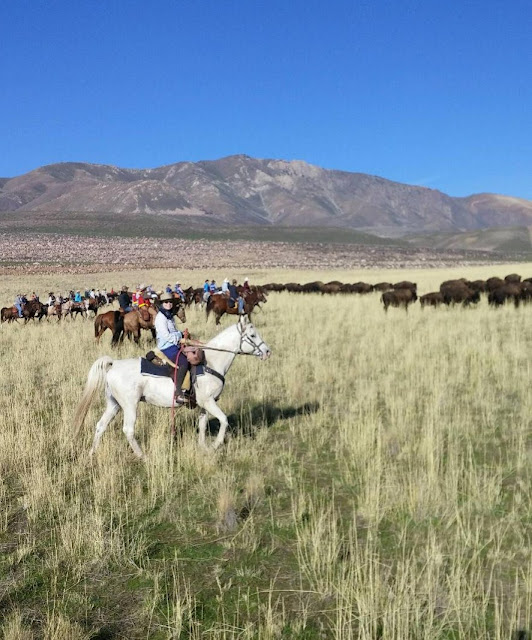 Luckily, we didn't get stampeded, gored, or thrown off our excited mounts, who danced and pranced most of the way.  Of all the experiences we've had riding horses in Utah, this has to be at the top of the list.
We're already looking forward to next year's roundup.
The "Rawhide" song was a childhood favorite.  I finally lived the dream!